SEREMBAN: A 39-year-old executive lost almost RM420,000 in a phone scam after being told by "cops" that she had been implicated in a fatal road accident as well as money laundering.

Negri Sembilan commercial crime chief Supt Aibee Ab Ghani said the victim first received a call from a suspect who identified herself as Sergeant Azliza Zaini around noon on May 21.

She was told that she was involved in an accident in Seri Kembangan, Selangor three days earlier.

"The so-called cop, who claimed to be from the Seremban traffic police department, told the victim that the accident happened on May 18 and that one person was killed," he said in a statement.

Supt Aibee said when the victim denied her involvement in the accident, the suspect transferred the call to what was supposedly the Seri Kembangan police station.

She was then made to speak to one "Tuan Hisham" who then transferred the call to one "Insp Chong Kok Sin".

"The 'inspector' then told the victim that she was involved in a money-laundering case involving RM23mil.

"The call was then again transferred to another so-called police officer with the name of Puan Yong Lei Choo," he said.

As with most other phone scam cases, the victim was then told to open a new bank account as the police would be investigating her existing accounts.

The victim was also told to keep the matter confidential.

On May 23, the victim withdrew cash from four bank accounts and deposited the cash into the new account totalling RM65,012 via the automated teller machine (ATM).

Another RM30,000 was transferred via online banking.

The remaining sum was transferred between May 24 and June 25.

Supt Aibee said on Aug 5, the victim went to the bank to update her new account and was shocked when told that the balance was only RM102.50.

She lodged a police report.

The case is being probed under Section 420 of the Penal Code for cheating, which provides a jail term of up to 10 years or a fine or both. 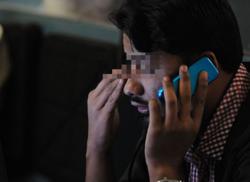