Suspicious nature: Pirated e-books are usually sold at unbelievably low prices, which should have raised red flags among potential buyers.

KUALA LUMPUR: Malaysian publishers have come out strongly against e-book piracy, which they say is becoming very widespread on e-commerce platforms.

The Malaysian Book Publishers Association said it had received many reports from publishers that their books, magazines and comics were being pirated and sold online.

“This is very damaging to authors and publishers. We are only asking for fair compensation for our work, but are being robbed by pirates.

“They penalise genuine sellers who are trying to compete on an honest and fair basis in the marketplace. We must stop piracy fast, before it gets worse for writers and publishers, ” association president Arief Hakim Sani said in a statement.

This statement was released in response to reports that the National Film Development Corporation (Finas) was conducting an investigation into the sale of pirated local films on e-commerce platforms.

“The whole creative industry of the country is under threat from piracy. Not just the book industry, but movies and music too, ” said Arief.

He said pirates would scan original books and sell them as e-book files on e-commerce sites.

These pirated copies would usually sell for about 50 sen, RM1 or RM2.

While specific data is not yet available, Arief said some pirates could sell hundreds or thousands of copies, which would lead to the publisher losing up to thousands of ringgit per pirated title.

Pirated e-books, Arief said, were usually sold at unbelievably low prices, which should have raised red flags among potential buyers.

“Most publishers also have official stores in the marketplace. Buyers can check prices there and make a comparison, ” he said.

Arief urged the owners of these e-commerce sites to take swift action to stop piracy on their sites.

“We feel there have been major failure by e-commerce platform owners to comply with the Copyright Act. We have sent warning letters, ” said Arief.

Under Section 41 of the Copyright Act, copyright infringement can be punished with a fine of between RM2,000 and RM20,000 for each pirated copy, up to five years’ imprisonment or both.

He reported it although he was not too affected as the pirated sales of his titles had been low.

Buku Karangkraf CEO Firdaus Hussamuddin, on the other hand, said e-book piracy was a major issue and many of the company’s titles had been pirated online.

Her company discovered that about 50 titles had been pirated and sold on various platforms during the movement control order.

“It is a serious problem, which is very frustrating for authors in particular.

“It takes a long time to write a novel. To let their hard work go to waste and their profits go somewhere else is not fair to them at all, ” she said.

She said online piracy was extra hard to tackle, compared with piracy of physical books. 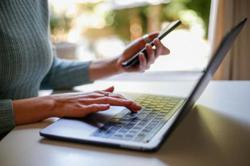