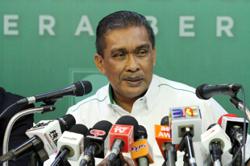 KUALA LUMPUR: The government is looking into drafting a special law similar to Singapore's Administration of Justice (Protection) Act 2016 to deal with cases related to contempt of court.

Minister in the Prime Minister's Department Datuk Takiyuddin Hassan said the Attorney General's Chambers (AGC) is conducting studies by comparing several legislations in some countries such as the United Kingdom, Singapore, and India.

"The government will also get input from stakeholders related to the matter. Actually, the AGC has looked into this matter since 2010.

"In 2013, a draft of a Bill was completed and it was referred to the judiciary and they provided good feedback," he said in reply to Datuk Liew Vui Keong (Warisan-Batu Sapi) during the Ministerial Question Time on Tuesday (Aug 4).

Liew had asked to state if the government intends to introduce a special law such as the Administration of Justice (Protection) Act 2016 in Singapore in order to deal with the rising number of contempt of court cases especially on social media more effectively.

Takiyuddin said in 2016, the draft of the Bill was in the verification stage at the AGC, however a year before that, the Home Ministry had made amendments to the Sedition Act.

He said currently, there are no specific laws to deal with contempt of court, but the judiciary is guided by the principles of Common Law and the Federal Constitution.

Meanwhile to a supplementary question, Takiyuddin said he has no qualms if he is summoned by the police over a controversial tweet he had allegedly wrote when former Prime Minister Datuk Seri Najib Razak was sentenced.

Liew, in his supplementary question, had said that contempt of court has become a new normal under the Perikatan Nasional administration.

"We can see leaders in Twitter, saying things over the conviction of a parliamentarian.

"In the Twitter statement, we can see the minister from the other side, together with the Environment and Water Minister (Tuan Ibrahim Tuan Man) and the special envoy to the Middle East (Datuk Seri Abdul Hadi Awang).

"I would like to know if the Minister's statement contradicts the principle of law and are the rules different for ministers and normal individuals," asked Liew.

Liew then read out the tweet allegedly written by the minister.

Takiyuddin said he was not sure which remark Liew was referring to.

He admitted that he and several PAS leaders had visited Najib's house, but said that was not new.

"Once upon a time, when action was taken against (Datuk Seri Anwar Ibrahim), the PAS president had visited him too, so this is normal.

"However, as a law practitioner, I am subjected to law. If anything I have done was subjected to a particular law and the police calls me, I am prepared to go to the police station to offer an explanation," he said.