KUALA LUMPUR: Two Opposition MPs urged the government to waive off the mandatory quarantine fee for Johoreans in the low-income group.

Johor Baru MP Akmal Nasrullah Md Nasir pointed out that there were jobless Malaysians who were stuck in Singapore after the borders were closed on March 18 when the movement control order (MCO) was enforced.

He also said there were Malaysians who chose not to return to the country since March, because they could not cross the causeway on foot.

“These people are the elderly, women and children, ” he told reporters during a press conference in Parliament on Monday (Aug 3).

He also said that the maximum subsidised quarantine fee of RM2,100, or 44.7% of the total bill, was a burden to poor Malaysians.

At the same time, Akmal questioned why wouldn’t the Johor state government bear the quarantine costs for poor Malaysians, as it was done by the Sarawak state government.

“Don’t punish others for the failure of some to abide by home quarantine rules, ” he added.

Pulai MP Datuk Seri Salahuddin Ayub pointed out that a majority of Malaysians stuck in Singapore were motorcycle riders, as he said there were 300,000 of them crossing over to the border on a daily basis.

He said that the Opposition is merely requesting the government bear the quarantine costs, as these were Malaysians merely looking to make a living in Singapore.

“They are from the poor group. I hope the government will consider waiving the quarantine costs for them, ” he added.

On July 29, Senior Minister Datuk Seri Ismail Sabri Yaakob said the payment for the quarantine was for hotel room charges and the costs of three meals per day.

He said the total estimated cost for quarantine at designated stations was RM4,700 per person.

While Malaysians were enjoying a 44.7% subsidy, Ismail said foreigners who were allowed to return to Malaysia will be compelled to bear the full cost of the quarantine. 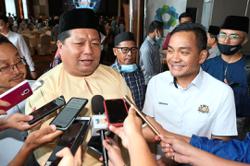