KUCHING (Bernama): A search and rescue (SAR) team here caught the saltwater crocodile which is believed to have devoured a teenage boy six days ago.

The 4.7-metre-long, 1.7-metre-wide reptile was then brought to land near Rumah Dadat, Tanjung Manis to obtain evidence of the incident.

According to Sarawak Fire and Rescue Department assistant director (operations) Tiong Ling Hii, the crocodile was caught at 9.15 am on Friday (July 31) about three kilometers from the jetty and near the location in which the victim was reported missing.

Tiong said that the crocodile was captured by the Swift Wildlife Action Team (SWAT) in collaboration with the Sarawak Forestry Corporation (SFC) and the police.

He said at 10 am, the crocodile was lifted out of the water and split open in front of the police officer, the victim's family and villagers.

"Some clothes and several parts of a human body were found in the crocodile's stomach," he said.

On Sunday (July 26),14-year-old Ricky Ganya was attacked by a crocodile while looking for snails by the river in Rumah Dadat, Tanjung Manis and his aunt said that she saw a crocodile pulling him into the water.

Three days earlier, a longhouse resident was also attacked by a crocodile at Sungai Seduku, a tributary of Sungai Batang Lupar near the Tuntun Longhouse in Sri Aman.

In the incident, 47-year-old Kong Gindi was believed to have been pulled into the water by the crocodile while he and his friend, known as Saji Thomas, 52, were washing the former’s boat in the river. - Bernama 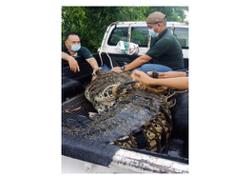