KUALA LUMPUR: Prime Minister Tan Sri Muhyiddin Yassin was spotted donning a Palestine flag muffler scarf in the Dewan Rakyat on Wednesday (July 29) as a show of support for Palestine against the illegal annexation of its territories by Israel.

Muhyiddin had also visited the Unite For Palestine campaign booth in Parliament, which was jointly organised by the Palestinian Embassy in Malaysia and Wisma Putra.

The campaign was organised by the Ministry of Foreign Affairs to show support for the Palestinian people and Malaysia’s stand in strongly opposing the annexation of the Palestinian West Bank.

“Coincidently, I also had the opportunity to meet the staff from Wisma Putra and the Palestine embassy who were on duty at the booth.

“The campaign is very good in giving exposure to MPs on the Palestine issue as well as the roles they can play to help Palestinians, among which include contributing to the Palestine Humanitarian Fund that is managed by Wisma Putra, ” he said in a Facebook statement on Wednesday (July 29).

He said the booth also explained the measures taken by the government at the national level to champion the plight of the Palestinian people.

He said Malaysia will continue to be consistent in championing the plight of Palestinians on the world stage.

The campaign was launched on Monday (July 27) at the Parliament lobby and attended by Palestinian ambassador Walid Abu Ali and several senior ministers and lawmakers, including Foreign Minister Datuk Seri Hishammuddin Hussein and Defence Minister Datuk Seri Ismail Sabri Yaakob, as well as other ministers.

The leaders put down their signatures as part of the campaign at a dedicated section set up in the Parliament lobby.

Wisma Putra in a statement said Malaysia had been consistent in continuously voicing its stand and strong opposition at international platforms on the Palestinian issue, including at the United Nations and Organisation of Islamic Countries (OIC).

Israel’s plan to annex Palestinian territories has been strongly criticised by UN-member countries, the OIC and Non-Aligned Movement member countries.

On July 16, an emergency motion was tabled in Parliament by Ledang MP Syed Noh Syed Ibrahim to debate the proposed annexation plan by Israel of the occupied Palestinian territories.

The motion was later passed. 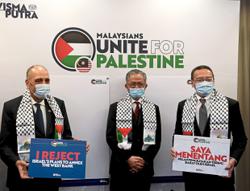