PETALING JAYA: A man rammed his car into three other cars before hitting two female pedestrians and a newborn boy near the entrance of the Thomson Hospital in Kota Damansara.

Petaling Jaya OCPD Asst Comm Nik Ezanee Mohd Faisal said the man stepped on the accelerator as soon as he saw his child coming out of the hospital, lost control of his vehicle and hit three other cars and the victims.

It is learnt that the culprit was waiting to pick up his child before the incident occurred at about 5.45pm on Saturday (July 18).

"The two pedestrians, aged 30 and 35, and the day-old baby sustained injuries.

"They are being treated at the hospital's red zone and emergency ward," ACP Nik Ezanee said when contacted on Sunday (July 19).

He also said the suspect had been detained and a urine test revealed that he was not intoxicated.

"We are investigating under Section 42 of the Road Transport Act 1987 for reckless driving.

"He could face up to five years in prison and be fined not more than RM15,000 upon conviction," he added. 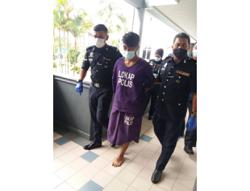