"I have never approved the selling of (government) assets.

"If (sale of government asset was) done, it was under other ministers, but not the Finance Ministry, so don't blame the minister," he said in his debate on the Royal address on Wednesday (July 15).

Lim said this in reference to a report last year that Malaysian sovereign fund Khazanah Nasional Bhd sold some of its stake in Japan's Mitsui & Co Ltd as part of an asset rationalisation exercise.

Lim's response caused a slight commotion when some lawmakers pressed the Bagan MP to reveal who was behind the sale.

Datuk Seri Abdul Azeez Abdul Rahim (BN-Baling) said: "Then tell us who is the Minister? Was it the Prime Minister? Be a gentleman and tell us."

"What about those assets under MOF? Who sold them? Who has the power?" he asked.

To this, Lim replied calmly that it was all approved by the Cabinet.

Tajuddin retorted how Lim could be unaware of such a decision.

To this, Lim answered that they should refer the matter to Gombak lawmaker Datuk Seri Azmin Ali.

"Khazanah or Mitsui is not under MOF. Please ask YB Gombak," said Lim.

Lim then went on with his debate without touching on the issue anymore.

Earlier in his speech, Lim had called on the government to extend the loan moratorium to another six months.

This, he said, was to help sustain businesses as they recovered from the Covid-19 pandemic.

He also urged the government to double the electricity rebate from the current RM77 to RM154, for the b40 and middle-income earners. 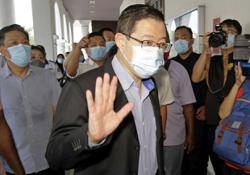