Teenager crashes into patrol car while trying to escape cops

BUKIT MERTAJAM (Bernama): Fearing arrest for not having a licence, a teenager drove against traffic in a bid to escape but was arrested after his Perodua Kancil crashed into a patrol car in Bukit Tengah here Friday (July 10).

"The teenager's car jumped a red light at the Jalan Perindustrian Bukit Minyak intersection and refused to stop when ordered by a police patrol in pursuit.

"The patrol car finally intercepted his vehicle but when policemen disembarked to check on the teenager, he reversed his car and tried to flee towards Permatang Tinggi," he said when contacted here Saturday (July 11).

The policemen then got back into their vehicle to give chase but the teenager lost control of his car and crashed into the patrol car, he said.

Shafee said the suspect then abandoned his car and tried to escape on foot but was caught.

Upon questioning, the teenager admitted that he tried to escape because he was driving without a licence.

"The teenager, who is a mechanic, is being investigated under Section 186 of the Penal Code for obstructing a public servant from discharging his duty," he said. – Bernama 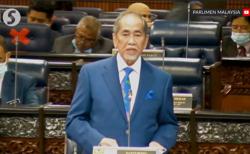 ‘Flying car project being developed in the private sector’