In a post on his blog sallehsaid.com, he said he had withdrawn his application to join PKR in April.

Before applying to join PKR, Salleh and former Parliament speaker Tan Sri Pandikar Amin had wanted to join Parti Pribumi Bersatu Malaysia, but their applications were not approved.

Salleh's application to join PKR was never decided upon due to objection from PKR leaders.

Pandikar did not apply to join PKR and had talked about restarting his defunct Parti Akar.

Meanwhile, Sabah Umno chief Datuk Bung Moktar Radin said that Sabah Umno had no objections to Salleh coming back to the fold.

He said Sabah Umno had forwarded Salleh's application to Umno headquarters for the supreme council to decide.

"We are confident he will be accepted," he said.

He was also communications and multimedia minister from 2015 until the 2018 general election when he lost his Kota Belud parliamentary seat under Barisan Nasional to Parti Warisan Sabah's Isnaraissah Munirah Majilis. 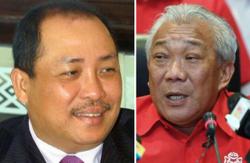