Retailers luring shoppers back with sales and promos

Safety first: A shopper getting his temperature checked before being allowed to enter a shop at Gurney Plaza. — LIM BENG TATT/The Star

GEORGE TOWN: Sales and promotions at shopping malls and supermarkets here are attracting customers back and giving the retail sector a much-needed boost.

A check on many outlets showed that nearly all of them were offering big discounts, gifts and buy-two, free-one deals.

Retailers interviewed were upbeat about revenue rebounding to the “good old days” before the year is over.

Cosmetics store manager Michelle Tan, 29, said her company was recovering from the plunge in business over the past three months due to the movement control order (MCO).

“Although malls reopened two weeks ago, we were not getting tourists and locals only returned to replenish supplies.

“Most of them are wary of splurging on new products due to economic uncertainty and we estimate to lose 30% in sales this month compared to normal times.

“To keep sales rolling, we are offering a buy-two, free-one promotion to encourage them to spend

the same amount but bring more home,” Tan said at her store in Gurney Plaza yesterday.

Many other outlets such as clothing stores are offering discounts of up to 70%.

“The new season is coming and the discounted stock is left over from the last season.

“Customers are not allowed to try on the clothing or return them, but they are still willing to buy them at lower prices,” said a store worker.

Gurney Paragon Mall recorded an increase of about 20% in footfalls compared to two weeks ago, said

“The crowd increase is obvious, especially at fashion outlets, and long queues can be seen outside certain fashion retailers.

“Many retailers are giving attractive discounts and offers, with some extending their promotions for Fathers Day, which was last Sunday,” she said.

“We have safety ambassadors who walk around the mall and assist shoppers if they are not complying with the standard operating procedure (SOP).

“The ambassadors advise them about keeping everyone safe. So far, all the shoppers have been cooperative,” she said.

Tai revealed that the mall is organising its cardmember’s day on July 11 and 12 and shoppers will be rewarded with freebies such as free parking, redemptions and lucky draw prizes.

“The mall is working with tenants to give out buy-one, free-one deals on food and beverage every Tuesday.

“When cinemas reopen in July and entertainment outlets can operate again, we will see more people coming out to spend.

“We foresee the number of shoppers to be like in previous years by December, when festive shopping is a must,” she added.

Meanwhile, supermarkets in various malls have long lines of customers waiting outside for their turn to enter due to the SOP.

Housewife G. Shanti, 48, said it was her third time shopping for household items and cooking ingredients since two weeks ago.

“I’m reluctant to visit the wet market as many people crowd there.

“At the mall, it is properly sanitised with better crowd control. I feel safer shopping here and they have everything I need under one roof,” she said.

Other shoppers voiced a similar opinion, preferring supermarkets to wet markets despite the need to wait in line.

“Just as I don’t want to crowd, I have to respect those who arrive earlier, so I line up.

“To keep everybody moving, I buy whatever I need and leave,” said one shopper. 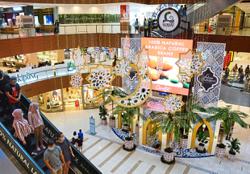