By SANDHYA MENON and REBECCA RAJAENDRAM

PETALING JAYA: Students, mainly those sitting for the SPM and STPM examinations, have given their thumbs up to the change in this year’s academic calendar, saying it has “more pros than cons”.

The reason for this from most Forms Five and Six students was that they would get more time to revise their studies.

A Form Six student in Melaka, who wanted to be known as Yee, said he anticipated the changes due to the movement control order (MCO).

“It will help us regain the school days we missed over three months due to the MCO.

“As an STPM candidate, the extra days will be helpful as lessons are more effective in the classroom,” said the Kolej Tun Fatimah student.

The Education Ministry announced yesterday that the mid-semester school holidays for Semester Two will now be from Aug 20 to Aug 24 while the year-end holidays will be from Dec 18 to Dec 31, depending on the state.

The year-end holidays for schools in Johor, Kedah, Kelantan and Terengganu were reduced from 42 days to 14, while schools in Melaka, Negri Sembilan, Pahang, Perak, Perlis, Penang, Sabah, Sarawak, Selangor, Kuala Lumpur, Labuan and Putrajaya will have a 13-day break, the ministry statement said.

It added that the 2020 School Academic Calendar was amended to assist schools in planning the teaching and learning process.

The total number of days students will physically be in school will now be 168 days for all schools, it added.

Another Sixth Former, John Lee, said he could not concentrate on his studies and tests properly during the various stages of the MCO since its implementation on March 18.

While studying online was the new norm, “it is not the best learning mechanism for me”.

One of her biggest challenges studying from home was her inability to clarify topics with her teachers and friends quickly, she added.

Parent Action Group for Education (PAGE) Malaysia chairman Datin Noor Azimah Abdul Rahim commended the move, as time was lost during the MCO period.“Many students have not experienced academic learning as teachers were not able to connect with them during the MCO. Now is the ideal time to catch up and make up for this lost time.

“In fact, teaching should have continued during the two week mid-term holidays in June as learning prior to that had been light and unchallenging,” she added.

National Union of the Teaching Profession (NUTP) secretary-general Harry Tan said the union was not consulted on details of the academic calendar.

He said that while the union believed the ministry had taken into account the interests of all parties when the calendar was drawn up, it hoped that the shorter year-end holidays would not create “other unnecessary problems”.

“My worry is the floods that often occur at the end of the year, putting many families in a difficult situation. This is why we reserve the year-end for holidays,” he added. 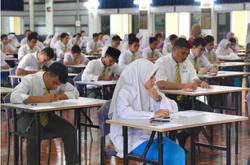