KOTA KINABALU: Wild species of figs that are vital as animal food have become part of a new conservation effort at the Tabin Wildlife Reserve, once home to Sabah’s now extinct Bornean rhinos.

Borneo Rhinos Alliance (Bora), an NGO involved in the conservation of rhinos, has established the Sabah Ficus Germplasm Centre to conserve and preserve ficus, a name for about 150 wild species of figs found in Borneo.

Conservationists say that figs provide food for many wildlife species and some ficus species have potential as ornamentals and the leaves as domestic animal food.

“The unique centre houses over 70 species of Bornean wild figs and more are being added,” said its chief conservator of forests Datuk Mashor Mohd Jaini.

“About half of Sabah’s land area is forest reserve, much of that now regenerating after a long history of logging.

“But to conserve certain wild species, we need to start targeted programmes.

“The centre not only aims to be a store of the diversity of living fig species but also a source of planting materials for restoration work in forest reserves and private land owners,” he said.

Mashor urged companies and individuals to play a bigger role in the conservation of Sabah’s biodiversity heritage.

“We started planting and cultivating many kinds of local ficus in Tabin in 2011 as a means to supply food for the rhinos.

“With the death of the last rhino in Sabah, we realised that we had inadvertently created a unique garden.“We have been experimenting with various ways of producing seedlings and it turns out that most species can be cultivated through a method called vegetative plant propagation or marcotting,” he said.

Dr Zainal said in 2018, they started supplying marcots to a small number of oil palm estates where the management was interested to cultivate food plants for wild orang utan there.

Under Malaysian Sustainable Palm Oil standards, if endangered species or high biodiversity values are present in a plantation, appropriate measures for management planning and operations are required.

This can take the form of cultivating wildlife food plants such as ficus on riparian zones and steep areas.

Among the ficus species in the Germplasm Centre are microcarpa, which can grow to a large size on swampy land; racemosa, locally known as tangkol, a riverside specialist that has fruits edible to humans; crassiramea, a large strangling fig whose fruits are favoured by hornbills; minahassae, found only in eastern Sabah, Sulawesi and the Philippines; and several species that offer potential as livestock feed.

The centre is also conducting research into propagation methods and training for interested parties.

In addition, there is potential for collaboration with universities and other research institutions. 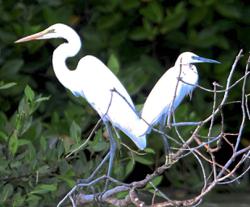 Where to flock to in Malaysia for birdwatching?