BEIJING: Malaysians are cautious, with some even waiting hours to get tested for Covid-19, following a resurgence of cases here.

Residents from the 27 medium-risk zones and one high-risk zone are not allowed to leave Beijing while the rest must have negative results of the nucleic acid test before leaving the city.

Terence Hew said he waited for more than six hours for the test yesterday.

“I have no choice because I need to go back to Shenyang (a city in the north-east Liaoning province). My family is there, ” said the Malaysian businessman who travels between the two cities frequently.

He has been taking extra measures, including wearing face mask at all times, although the Chinese government had relaxed the rules as the pandemic situation improved.

The Covid-19 outbreak at the Xinfadi wholesale market has put the city back on high alert, just 10 days after the local government lowered its emergency response level.

So far, there have been 137 confirmed cases since June 11.

The daily double-digit growth in domestically transmitted cases has forced the Beijing municipal government to raise the emergency response level to grade two from grade three.

At an emergency press conference on Tuesday night, the city’s government also announced that all primary and secondary schools, which had just resumed physical classes on June 1 would be shut.

Sze Hui Leng, who is in Malaysia now, said she and her colleagues had been contacting parents and students to inform them of the news.

“The order came in quite late, just before 11pm. So we immediately split our duties, ” said the 41-year-old administrative assistant at an international school here.

Sze has been stranded in Malaysia since she returned for holiday in mid-January.

“My apartment opened up around the end of last month. We no longer had to show the residents’ pass or have our temperature taken upon entry.

“All the exit and entry points were opened but now, it is back to square one, ” he said.

The management of his electronics manufacturer plant, said Pang, had also asked all non-essential staff to work from home starting yesterday.

“All of us are banned from taking public transport except taxis and e-hailing cars.

“Employees who live within 5km from Xinfadi are required to stay home or take the nucleic acid test, ” he said.

On June 6, the Beijing government lowered the emergency response level to grade three – the second lowest.

Following this, masks were not required outdoors while crowd activities such as conferences, exhibitions and sport games could be held. 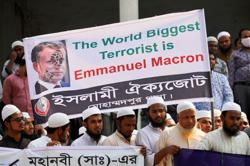