KLANG: Several roads will be closed and routes diverted for five days from June 17 to June 21 until debris from the collapsed steel truss at the 2nd milestone Jalan Meru here is cleared.

The incident happened within the LRT3 work area opposite the TM Point outlet and near the Meru wet market.

According to North Klang OCPD Asst Comm Nurulhuda Mohd Salleh, among the roads that would be closed were Jalan Meru from the Klang town centre heading towards Meru (with the alternative route being Jalan Meru to Jalan Sentosa 14 and back into Jalan Meru), and Jalan Kedah junction heading towards Jalan Meru.

The alternative route for it would be Jalan Kedah into Jalan Meru towards the Klang town centre.

ACP Nurulhuda also said Sunway Construction, which is the work-package contractor for the project, had contacted the North Klang traffic police at 6.00am to help control the traffic in the area.

Earlier in the day, Sunway Construction also issued a statement, saying that the structure gave way when crosshead concreting works were being carried out.

It added that necessary measures to address it had been initiated.

“We have cordoned off the area and our emergency response team (ERT) is managing traffic along with the traffic police," said the statement.

The statement apologised for the inconvenience caused and said the incident was being investigated. 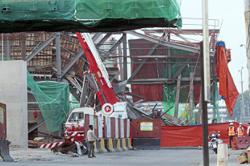