PUTRAJAYA: Covid-19 screening will be conducted on 600 inmates sharing the same block with the one who has been tested positive for the virus at the Sungai Buloh prison, says Senior Minister Datuk Seri Ismail Sabri Yaakob.

He said the tests, which starts on Tuesday (June 2), will also be conducted on 700 prison staff.

"Swab tests will not be conducted on inmates residing in other blocks. This is because there is no interaction or meeting between inmates of different blocks.

"So, there is no need for the rest to be tested," he said.

There are eight separate blocks at the Sungai Buloh prison.

According to reports, the prisoner, a foreigner, was detained as an undocumented worker since 2016, but left the prison on March 13 before he was found to be positive for Covid-19.

The individual has since been transferred to the Immigration depot in Semenyih.

On another matter, Ismail Sabri said the Rohingnya refugee who is suspected to be infected with Covid-19 and had escaped from a quarantine centre, has been found.

"He has been arrested and has been sent back to the quarantine centre," he said.

The refugee, identified as Rohim Mohd Zokaria, was found missing from his room at the Health Ministry training institute in Tanjung Rambutan, Perak on May 31.

Health personnel were about to conduct tests on those being quarantined there when he was not to be found in his room. 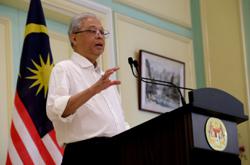