"The MySejahtera Check-In application will help facilitate registration and monitoring of visitors in a more structured and uniform manner for commercial premises including factories, construction sites and offices.

"It will also allow the government to better manage and control the spread of Covid-19 when the nation's economy begins operating again.

"The application can be used from June 2 at three Aeon outlets," he told reporters Sunday (May 31).

He encouraged members of the public to download the latest MySejathera Check-In app as it would help in breaking the chain of Covid-19 infections.

On the MySejahtera app, he said it had a total of 770,216 registrations with 929,276 health status evaluations.

"Although we had announced that banks were allowed to resume operations as normal, we found that their ATMs were still operating between 8am to 8pm," he said.

Previously, banks were only allowed to operate their ATMs between 8am and 8pm when the movement control order was initially announced. 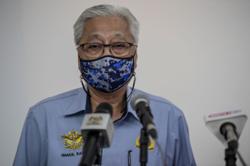