PETALING JAYA: New standard operating procedure (SOP) for the Chini by-election has been prepared by the Election Commission (EC).

EC chairman Datuk Azhar Azizan Harun said discussions on a special electoral process SOP had been held with the Health Ministry and other authorities.

“We will abide by restrictions under the conditional movement control order (MCO) if it is extended over the by-election period.

“Right now we do not know yet. But whatever it is, we have prepared an SOP on the assumption that the CMCO is extended, ” he said.

The SOP, he said, would cover all aspects of the process – distribution of election materials, nomination day, campaigning, early voting and polling day. “We have made preparations for all the SOP, taking into account all the conditions imposed by the authorities – social distancing, sanitisers, temperature check, masks and no gatherings, ” he said.

Azhar said the EC would also announce a “recommended” time for each voter to prevent crowds and bottlenecks at the polling centres.

“You are encouraged to come out at that time. For example, if you appear first in the electoral roll, the period for you to come out and vote would be between 8am and 10am, ” he told The Star.

Azhar said the timetable was however not mandatory and was more of a guide.

Nomination day has been set for June 20, while polling day is on July 4.There are 20,990 eligible voters for the Chini by-election, with an estimated 70% turnout.

He retained the seat in GE14 with a 4,622-vote in a three-cornered contest against candidates from PAS and PKR.

Barisan Nasional has said it will defend the seat in the by-election.

The voter’s card was introduced in the Semenyih by-election in March last year.

The voter’s card, which is sent out by the Election Commission, contains personal particulars such as the voter’s name, the voter’s MyKad number, voting stream and the time and place to cast the ballot papers. Azhar also stated that Chini had been classified as a yellow zone, after one positive case of Covid-19 was detected there recently.

He said the SOP contained detailed instructions such as the safe handling of postal ballots and voters who were coughing.

“It is challenging, ” Azhar said.

“It is going to involve a higher cost. The extra cost is because of the extra things we now have to provide and the higher number of workers, ” Azhar added. 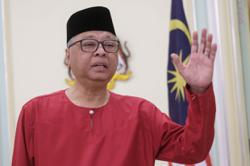