Cuffed: Man with 620 litres of diesel in his van

SIBU: The driver of a van has been detained for being in possession of 620.7 litres of diesel without a permit from the Ministry of Domestic Trade and Consumer Affairs.

The ministry's Sibu branch chief Kelyn Bolhassan said the 29-year-old employee of a company here was caught carrying the diesel in a van on May 22 on Jalan Salim.

"The suspect failed to furnish any document to prove that he has a permit to own such a large quantity of diesel, a controlled item," he said.

He was detained for investigations under Section 21 of the Supply Control Act 1961, which provides for a fine of RM1mil for individual offenders and RM2mil for companies upon conviction.

Kelyn said under the law, members of the public were not allowed to purchase more diesel or petrol than could fit the tank of their vehicle without a permit.

"Petrol stations are also advised not to sell to the public more than the quantity allowed under the Act.

"Stern action would be taken against them if they are caught," he warned.

Kelyn also said people could provide information or complaints against errant traders through the ministry's email address at e-aduan@kpdnhep.gov.my or its WhatsApp number at 019-2794317. Two nabbed in Sibu for illegal possession of diesel 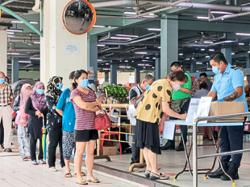