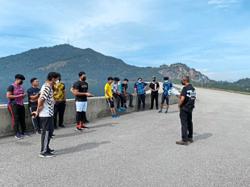 The Chief Minister said that dining-in will be allowed in phases in Penang.

“Phase one will begin on Friday (May 15), and only hotels, shopping malls and fast food franchises will be allowed to provide dine-in services,” said Chow in a Covid-19 live Facebook message on Tuesday (May 12).

He added that eateries must adhere to guidelines which will be announced by the Penang Island City Council (MBPP) and Seberang Prai City Council (MBSP) on Wednesday (May 13) after coordinating with the local government and the state Health Department.

“As for other food premises, the permission to dine-in will be refined in phase 2, therefore it is still not allowed,” he said

Chow said that this is based on advice from the state Health Department.

He added that this was one of the issues discussed in the latest state Special Security Committee meeting on Tuesday.

Chow also said that Penang will be entering into the opening phase of the Penang Gradual Recovery Strategy (PGRS) on Wednesday (May 13).

“All sectors and activities allowed by the Federal Government under the conditional movement control order (MCO) will be allowed in Penang, according to the standard operating procedures (SOPs) issued, ” said Chow.

He added that the list of prohibited activities remains as announced by the Federal Government, adding that any activities not listed are disallowed.

Chow also said that the local executive council, local authorities, the Social Security Organisation (Perkeso), the Department of Occupational Health Malaysia (DOSH), Penang National Security Council (MKN) will streamline the implementation of SOPs regarding screening tests on workers in construction sites and the manufacturing sector before announcing it in the near future.

He said that this will be done with the state Health Department as the technical advisor.

Chow also said that sports complexes, stadiums and public halls will be closed and recreational activities will be limited to pocket parks in residential areas.

He added that as for congregational prayers, the state government will use the SOPs set by the Federal Government and that this SOPs will also apply for other religions.

“As for the Hari Raya Aidilfitri celebrations, we took into consideration the advice by the state Health Department director that not more than seven guests are allowed at flats and apartments.

“Although Penang is classified as a green state from Covid-19, screening tests are still ongoing in Penang for those involved in high-risk groups such as madrasah and tahfiz schools, foreigners, caretakers at senior citizen care centres and traders at 35 markets in the state,” he said.