Covid-19: Crowded living quarters is cause for spread of virus among foreign workers PETALING JAYA: The spread of Covid-19 among foreigners is due to their crowded living spaces, says Health director-general Datuk Dr Noor Hisham Abdullah.

Dr Noor Hisham said this can be seen in places such as the Selangor Mansion, Malayan Mansion and Menara One City which was put under the enhanced movement control order (MCO) due to the spread of the virus among the residents there.

"One apartment perhaps there are 30 people living in it. The same goes for the construction areas, where at least 15 people are living in one apartment.

"Hence, the crowding in the house is one of the factors why the virus is spreading," he said during his daily press briefing on Sunday (May 10).

He also noted that there has not been an increase of positive Covid-19 cases emerging from a construction site in Setia Alam.

Dr Noor Hisham said the situation was under control and that there was no need to put the area under enhanced MCO.

"Today there is no increase in cases. There are still 12 cases recorded to date. We are still doing acute case detection on the 12 positive cases which include their close contacts," he said.

On Saturday (May 9), a new cluster emerged from a construction site in Setia Alam involving 12 foreign workers.

The 12 foreigners who were tested positive were all Bangladeshis.

Four deaths have been reported among the foreigners to date, he said. 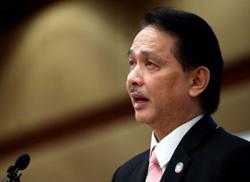