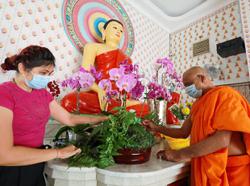 Instead of the usual annual celebration with devotees thronging temples, the shift took worshippers online for prayers and dedications through live streaming on social media platforms initiated by various Buddhist temples.

With temples closed, Sean Yoke Lin could only offer her prayers outside the gate of the Buddhist Maha Vihara (BMV) Temple in Brickfields.

“I come here and help as a volunteer on Wesak Day every year. It is usually a big celebration involving thousands of devotees.

“We would prepare free lunches and drinks as devotees flocked to the temple for the two-day celebration, which also included the candlelight and float procession.

“It’s a quiet affair this year but it’s fine because we must prioritise public health, ” said the 64-year-old single mother who lives near the temple.

“Although we can’t pray at the temple, it’s still the same. What’s important is our mind and heart, ” she added.

Sean said she prayed for the pandemic to be over soon and for her three daughters to be safe.

BMV honorary secretary Tilak Leslie Jayawardena said this was the first time in 126 years that the temple celebrated Wesak with the gates closed.

“Since the eve of Wesak on Wednesday, the live streaming of the lighting of the first oil lamp by the chief monk was done through BMV’s Facebook page, followed by a worship and dhamma talk, ” he said.

Yesterday, live streaming began with a message from the temple’s chief monk, Datuk K. Dhammaratana, at 7am.

“As we are still under the MCO, all the usual annual activities have been put online for our followers to observe this holy day virtually.

“Although this year’s celebration is vastly different, we hope everyone joins the virtual activities to commemorate the Buddha, ” he said, adding that everyone should get used to the idea of praying and practising spirituality from home.

Apart from the live stream, there were also other activities such as the offering of light and wishing tree message where devotees could make a donation and write aspirations for themselves or their loved ones.

Similarly, the Fo Guang Shan Dong Zen Temple has enabled devotees to pray and make their vow through its website, including conducting the Buddha bathing ceremony virtually, which has attracted over 10,000 participations.

The temple’s PJSS3 deputy abbess, Ruxing Shih, said the temple would be carrying out its virtual prayers via Facebook Live and Zoom.

“Other activities such as storytelling for children, a music concert featuring local singers singing Buddhist prayer songs and blessings are also conducted virtually throughout the day, ” she said.

Although the experience of celebrating Wesak Day together with others might be missing this year, she said commemorating the Buddha at home is good for self-reflection and deepening the teachings of the dharma. 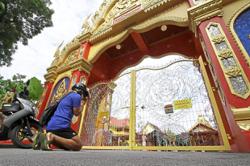 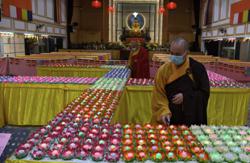