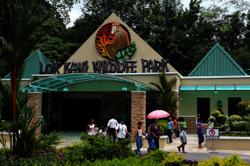 Liew said they hoped to put the recovery plan in place by the end of the year, or early next year.

“For a start, we will apply to the Finance Ministry for allocations in our efforts to upgrade and improve our existing tourism products, including infrastructure and maintenance of all our facilities, ” she said after a brainstorming session with six state agencies on Tuesday (May 5).

Liew said her ministry’s permanent secretary Dr Jamili Nais and his deputy Mariam Omar Matusin would spearhead efforts in formulating the proposed plan for the domestic and international tourism segments.

"With the easing of the restricted movement, we would expect works to begin on improving the Sabah Cultural Centre building (under the purview of Sabah Cultural Board), Poring Hotspring chalets, Petagas Memorial Hall and Tawau Hills Park," said Liew, who is the state Tourism, Culture and Environment Minister.

On the international tourism front, the ministry via STB agreed that attention would shift from mass tourism to high-yielding upmarkets for maximum returns.

STB general manager Noredah Othman said digital marketing would be the main tool for now, as the international travel roadshows have come to a halt.

Sabah Wildlife director Augustine Tuuga said the department would oversee the maintenance of Sepilok Orang Utan Rehabilitation Centre in Sandakan and the development of the proposed Elephant Food Corridor, in a yet-to-be-identified area within the Kinabatangan Wildlife Sanctuary.