KUALA LUMPUR: The two blocks of flats in Jalan Masjid India placed under the enhanced movement control order (MCO) here and packed with mostly foreign low-income workers are proving to be a logistics nightmare for the authorities, especially when it comes to feeding these residents.

For each meal, it takes frontliners up to two hours to distribute food packs from door to door for each meal to the estimated 6,000 residents, the authorities say.

Under the enhanced MCO, all non-residents and visitors are prohibited from entering the area.

Residents are only allowed to order food that must be sent to and picked up from designated areas. All business activities have been shuttered except shops selling essential items in the buildings.

Besides the 6,000 residents, there are about 2,000 medical and security frontliners manning the area.

The flats – Selangor Mansion and Malayan Mansion – are among the oldest dwellings in the capital and are each eight storeys high.

Sitting in the heart of the city, the two blocks of 240 units are dilapidated and dirty despite being on prime land, with some popular jewellery, money-changing outlets and boutiques on their ground floor. The two blocks were placed under enhanced MCO on Tuesday after 15 positive Covid-19 cases were recorded.

In announcing the enhanced MCO, Senior Minister Datuk Seri Ismail Sabri Yaakob said that the welfare of foreigners living in the Selangor Mansion and Malayan Mansion buildings was the responsibility of their respective missions.

Annuar said that the Federal Territory Ministry and the agencies involved were being stretched thin due to the high number of residents needing meals.

“We are preparing meals for at least 2,000 people every mealtime now, but we need so much more as we also have to feed the frontliners.

“Do not forget we have another 1,000 homeless people in other shelters to feed while we cater to the Jalan Masjid India flats. There is a schedule that states who will be providing what to ensure there is no overlap and no wastage of food.

“We also call upon the business people in the area to come forward and help out during this time of need. I am donating personally as NGOs are being stretched, ” he said.

The Federal Territory Welfare Department said that some units could be packed with up to 20 people, and most of these units were inhabited by only men.

DBKL Corporate Planning Department director Khairul Azmir Ahmad said that food packs would be given to the residents three times a day and delivered to the designated drop-off points in the area.

“Breakfast will be delivered at 7am, lunch at 11.30am and dinner at 5.30pm. But it can take up to two hours before all the packs are distributed to all the residents, ” he said.

Khairul said although NGOs had stepped forward to help, he stressed that the authorities could not rely on them indefinitely.

“NGOs are helping on a voluntary basis and they are constrained by their budgets, ” he said.

Jawi director Mohd Ajib Ismail said its food bank would provide breakfast for the residents for as long as the MCO period lasted.

“This morning (April 9), we distributed over 1,850 food packs containing roti canai and roti telur to the residents, ” he said, adding that the menu would be changed daily.

“We prepare rice with some vegetables for the residents. We want to cater to their dietary requirements, ” he said, adding that the aid would continue until April 14.

“Many of our staff in that area are living in these flats. I have also directed that our store in Jalan Masjid India be opened for deliveries of essential products for the frontliners and the residents.

“We will run at a loss but these people need to get their essential needs, ” he said. 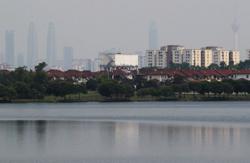 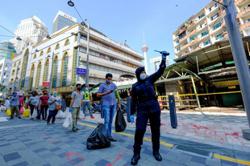