PUTRAJAYA: A sum of RM150 per day is allocated for accommodation and food for each person quarantined, be it in hotels or other facilities, says Senior Minister Datuk Seri Ismail Sabri Yaakob.

He said anything above the amount and other expenses such as laundry would be borne by the individuals.

“Those who want to be quarantined in four or five-star hotels can also do that and only at 45 gazetted hotels and to pay for everything, ” he said when responding to the issue which had gone viral on social media.

Ismail Sabri explained that five-star hotels had been gazetted as quarantine centres following requests from embassies to have their diplomats entering Malaysia be quarantined at such facilities and would bear the full cost of the stay.

“That is why we gazetted certain hotels as quarantine centres.

“For others who want to be quarantined at four or five-star hotels, they will have to bear the total cost of their stay themselves.

“Even then, they can only choose to stay at hotels that have been gazetted by the government as safety standard operating procedure will have to be adhered to, ” he said.

Ismail Sabri said aside from Malaysians returning from abroad, foreign ambassadors and diplomats were among those who would have to undergo the compulsory 14-day quarantine at government quarantine centres.

The government ruling on compulsory quarantine involved those who arrive in Malaysia from April 3 until the order is lifted to ensure returnees do not have or spread Covid-19.

Ismail Sabri said to cater for the expected large number of returnees, the government had gazetted hundreds of premises and facilities as quarantine centres.

This number includes 45 hotels of three, four and five-star ratings.

As of Monday, there were 7,500 people in 122 quarantine centres nationwide.

Meanwhile, those who want to pay for four or five-star quarantine accommodation will have to make their own bookings with the hotels as per the list.

According to the National Disaster Management Agency, those who made their own reservations must show the booking slip to the authorities upon arrival at entry points.

“For monitoring purposes, we only allow bookings for one hotel at a time, ” said an official.

The official said that usually, those who want to pay for hotel accommodation will call Nadma beforehand to ascertain the hotel that they can make the reservation. 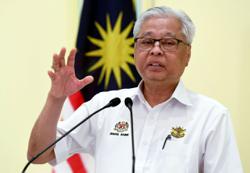