Sabah says no to Ramadan bazaars to curb Covid-19

A file picture of Sabah state secretary Datuk Safar Untong, who announced Saturday (April 4) that there would be no Ramadan bazaars in Sabah this year.

KOTA KINABALU: Sabah will not allow Ramadan bazaars to be held as part of efforts to contain the spread of Covid-19, says state secretary Datuk Safar Untong.

Safar, who chairs the Sabah Covid-19 Command Centre, said Saturday (April 4) that the ban was in line with the already existing ban on the weekly tamus (traditional markets) and Pasar Tani (farmers’ market) during the movement control order.

With the move, Sabah joins several other states in Peninsular Malaysia who have also announced a decision to prohibit Ramadan bazaar.

Safar said that most guidelines issued under the March 18 MCO will continue in the second phase of the MCO that has been extended till April 14.

Operations for petrol stations remains from 6am to 6pm with private vehicle owners allowed to use it till 2pm while the additional hours are for transport vehicles involved in essential services.

The state has also allowed certain registered workshops and pet shops to operate three times a week - Monday, Wednesday and Friday - from 8am to 2pm.

Fast food outlets should operate from 9am to 6pm, he added.

All private vehicles, e-hailing services and essential transport services would be allowed only from 6am to 6pm daily and they have allowed for the train and roro-ferry services to continue operating.

He said that food and health manufacturing factories are allowed to operate daily from 8am to 5pm. 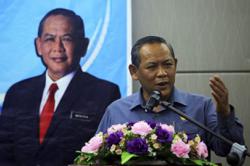