MCO: Arrested man tells cops he was at tabligh event to avoid lockup

HULU LANGAT: A man detained by the police for loitering during the movement control order (MCO) tried to avoid the lockup by falsely claiming that he participated in the tabligh event at the Seri Petaling Mosque and was likely to be infected.

Kajang OCPD Asst Comm Ahmad Dzaffir Mohd Yussof said a team on patrol in Balakong on Monday (March 30) spotted the man loitering around a condominium at around 2am.

"Our personnel tried to advise him to go home but he refused to listen so he was arrested and taken to the Kajang police headquarters CID office for further action.

"During interrogation, the suspect told investigators that he was one of the participants of the tabligh gathering at Seri Petaling.

"Our personnel immediately isolated him and informed the Health Ministry," he said after visiting the Enhanced MCO area at Kampung Sungai Lui here on Wednesday (April 1).

He said Health Ministry officials came and disinfected the CID offices as a precautionary measure while investigators spoke to the suspects family and friends.

"When our personnel spoke to his relatives and friends, they all told us that the suspect was not a participant at the tabligh.

"We then interogated the suspect again, and he finally confessed that he lied to avoid being remanded," he said, adding that police were now investigating him for obstructing civil servants from dispensing their duties and under Section 7(1) of the Prevention and Control of Infectious Diseases Rules.

He said they would also investigate the suspect for giving false statements to public servants.

Meanwhile, ACP Ahmad Dzaffir said they had detected a rise in online cheating cases involving sales of face masks on social media and other sites.

"Since March 9, we have opened investigations into 23 such cases involving losses of about RM87,263.

"We predict these numbers to increase if the public are not made aware and become more cautious," he said.

He added that buyers could cross check the account details of the seller via http://ccid.rmp.gov.my/semakmule.

"They could also check the status of the seller via biztrust.ssm.com.my," he said, adding that those with android-based mobile phones could also install the CHECK SCAMMER CCID application. 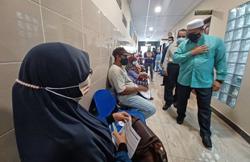