“At this crucial hour, the minister shouldn’t waste time and gather crowds for launching events with gimmicks.

“She should skip the stunts so that her PPE (suit) and the officers can be used to support our frontliners, ” said Akmal.

Akmal was referring to Zuraida's participation on Monday (March 30) in a disinfection exercise conducted by her ministry in Petaling Jaya.

Akmal said Zuraida’s participation in the sanitation exercise contributed to the issue of PPE shortage nationwide.

“The minister, who is not involved as a frontliner, will also cause a waste of resources in government hospitals, which are facing shortages of PPEs.

“In fact, some officers are even forced to use plastic bags as PPE to carry out their duties, ” said Akmal in a statement Tuesday (March 31).

Akmal also said Zuraida’s participation contributed to a wastage of manpower, as officers were required to adhere to certain government protocols for a ministerial event.

“For example, some officers who should have been working were forced to be used for escort purposes and to assist the minister in the gimmick, ” he added. 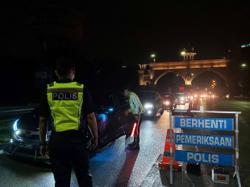