PETALING JAYA: Jovial pictures were posted on Facebook of the married couple from China who recently recovered from Covid-19 and was discharged from a hospital in Johor Baru.

In some of the pictures, the couple, who were the seventh and eighth confirmed Covid-19 cases in the country, were displaying the thumbs-up sign while wearing hospital clothes and posing alongside healthcare professionals.

Health director-general Datuk Dr Noor Hisham Abdullah, who shared the pictures on his Facebook account, said the couple was discharged from Hospital Permai in Johor on Tuesday evening (Feb 18).

“A picture is worth a thousand words. A cheerful and blessed moment for case number seven and his wife case number eight, (who were) discharged this evening, ” he said in his post.

Dr Noor Hisham said the husband was admitted into the hospital on Jan 27, and his condition had worsened due to severe hypoxia on the third day of his hospital stay.

Chest radiography, he added, showed that he had worsening pneumonia and he had to be started on medications and had even required a high flow oxygen mask when he deteriorated further.

“On day nine of his treatment, he showed remarkable improvement, weaning off the oxygen requirement until he was tested negative for Covid-19 twice, and discharged, ” he wrote.

His wife, Dr Noor Hisham added, was diagnosed when she was screened due to close contact.

“She was initially asymptomatic at the time of screening. However symptoms appeared on the second day of her admission, namely dry cough and sore throat, though there was no fever, ” he said.

He added that although samples taken on Feb 5 were tested negative, she wished to stay on with her husband until he recovered.

“We repeated her samples again when her husband has fully recovered and the results were negative on two occasions, ” he said.

Dr Noor Hisham expressed his gratitude to the Health Ministry staff who worked tirelessly to handle the Covid-19 cases well.

He specifically thanked Dr Masliza Zaid, the Infection Disease Physician and her team; the state health director Dr Aman Rabu and his team; the medical staff and the Medivest cleaners who cleaned the isolation rooms.

“There are no more positive patients in Johor Baru. Alhamdulilah and God bless us all, ” he said.

The number of Covid-19 patients in Malaysia who has recovered and allowed to return home is 13.

The total number of confirmed Covid-19 cases in the country remains at 22, with nine patients still under treatment.

Out of the 22 cases, 15 are China nationals, six are Malaysians and one is an American.

Covid-19: A glimpse behind the quarantine curtain 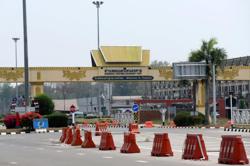