KUALA LUMPUR: A journalist claimed trial at a Magistrate's Court here on Wednesday (Feb 5) to three counts of making statements on the novel coronavirus (2019-nCoV) on her Facebook account that could cause disruption of public peace.

Wan Noor Hayati Wan Alias, 41, pleaded not guilty after the charges were read out to her before Magistrate Tawfiq Affandy Chin.

She was accused of knowingly making the statements on the coronavirus with the intention to cause fear among the public.

The statements were made on the "Ibu Yati" Facebook account and read at the commercial crime investigation department at Bukit Aman at 10pm on Jan 26.

The charges were under Section 505(b) of the Penal Code for statements conducing to public mischief.

Wan Noor Hayati faces a maximum two years' imprisonment, or a fine, or both, if convicted.

The accused, who was unrepresented, pleaded for a low bail.

The court fixed bail at RM4,000 in one surety for each of the charges and set March 11 for mention. 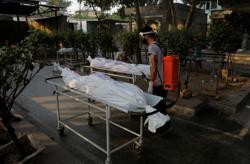