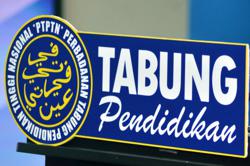 PTPTN chairman Wan Saiful Wan Jan said it had set a target of collecting a repayment of RM2bil for 2019 but as at Nov 30, RM2.07bil had been successfully collected.

He revealed that of the 172,863 students who enrolled in higher education institutions through PTPTN loans as at Nov 30,46% of them were from the B40 income group.

“As for the implementation of the government’s manifesto, PTPTN has executed 75% or three out of four related items, ” he said in a statement yesterday.

He added that those included giving a discount or eliminating the debt wholly for excellent students and students from low-income families; giving tax incentives to employers who help repay their employees’ debts without deducting their salaries; and eliminating the blacklist policy on borrowers.

“The promised delay in repayment for PTPTN borrowers who earn less than RM4,000 a month is still not implemented, ” he said, “as it involves matters outside PTPTN’s jurisdiction.”

“In addition, it has huge implications on the country’s finances.

“PTPTN has taken appropriate action which includes holding negotiations with stakeholders, ” he said.

“The deposited amount for SSPN accounts as at Nov 30 is RM798mil compared to RM671.97mil in the same period last year.

“This figure represents an increase of 18.76%, bringing SSPN’s overall deposit amount to RM5.3bil, ” he said.

A total of 4.32 million SSPN accounts had been opened since its launch in 2004, Wan Saiful said.

Wan Saiful also noted the recognition accorded to the corporation throughout the year, commending his officers for carrying out their duties well.