TVET committee on the right track

TECHNICAL and vocational education training (TVET) can lead to more lucrative jobs compared to some fields more suited for the academically-inclined.

Yet, very few people pursue this education pathway due to it being regarded as less prestigious. To counter this perception, the Government has been actively promoting TVET to society through various programmes and initiatives.

When tabling Budget 2020, Finance Minister Lim Guan Eng said RM5.9bil will be pumped into the TVET sector, emphasising its importance in producing the nation’s human capital. The Government’s efforts have not been in vain, thanks to the TVET Empowerment Cabinet Committee (JKKPTVET), formed after a directive from the Cabinet last August. A bright future lies ahead for TVET in Malaysia, says Maszlee.

During their first meeting, the committee outlined three main points. They envisioned a skilled workforce will exist in Malaysia by 2030. They are on a mission to empower the workforce with industry-based skills to drive the national economy.

They planned on doing this through five main recommendations beginning with the establishment of a National TVET Coordinating Body, financial model, joint ownership model, Industry TVET certification and a single national TVET brand.

To date, the committee appears to be on track to achieve their goals. JKKPTVET has aligned its objectives with all current government policy and initiatives, including the TVET 4.0 Framework by Department of Polytehcnic and Community Colleges (DPCCE), to prepare all TVET institutions to face the challenges of the Fourth Industrial Revolution (IR4.0).

The document explains how IR4.0 changes in Malaysia’s social, political and economic landscape will affect our future employment needs.

There are six key pillars outlined in the framework that support a number of strategies and initiatives to drive change in TVET education. This will not only generate more skilled human capital who can also think critically and are humane.

Innovation is the way forward

The TVET Innovation Ecosystem is also another DPCCE initiative to empower industrialisation within TVET institutions to establish a structured network of industries in polytechnics and community colleges with selected industries. The availability of highly skilled workers is key for a nation’s sustainable economic development.

The first TVET Innovation Ecosystem workshop was held on Oct 14 to identify the strengths and potential of these institution’s ecosystem and also set the direction for future collaborations.

We cannot live in a cocoon, shielding ourselves from the rest of the world if we want to succeed. Hence, DPCCE implemented various initiatives to internationalise Malaysia’s polytechnics and community colleges.

For example, a group of students from local polytechnics and community colleges were sent to be part of the fourth batch of Southeast Asia (SEA) TVET Student Exchange Programme.

The exchange programme saw a total of 111 inbound and 95 outbound students moving between Indonesia, Thailand and the Philippines from July until November this year.Their participation has opened a wider network for Malaysia to other Asean TVET institutions and various industries involved.

This has also benefited polytechnic and community college students who participate in international programmes by improving their communication skills, bolstering their self-confidence, learning about other countries’ cultures and languages.

They also learn about the new technologies and knowledge available in the countries they travel to.

The DPCCE has also received international delegates from various countries such as China, Canada, Bhutan, the United Kingdom and Japan to discuss various issues and collaborations that may take place in the field of TVET. 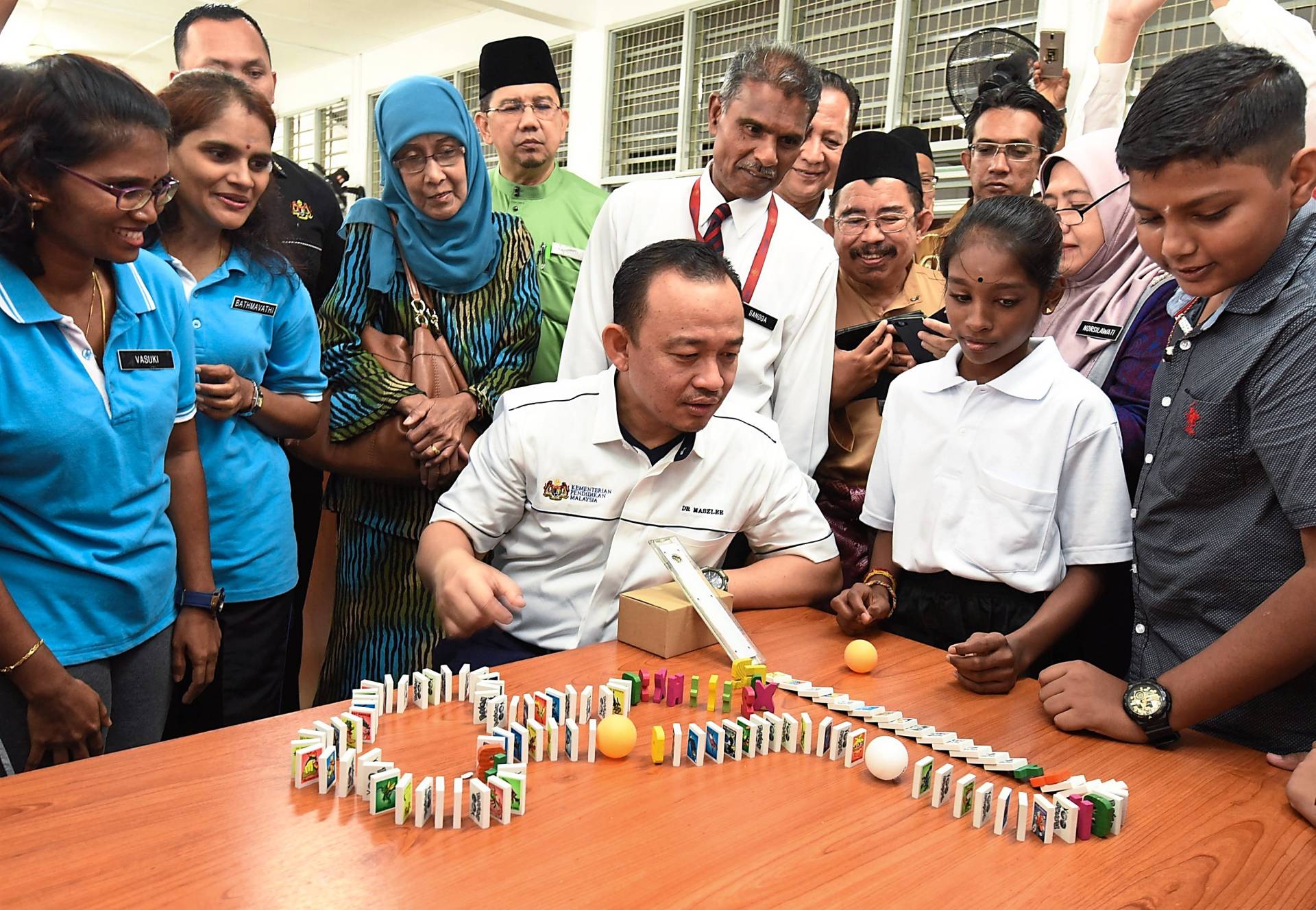 Maszlee (seated, centre) observing the demonstration on dominoes during a visit to SJK (T) Sungai Ara in Bayan Lepas, Penang.

The Tahfiz TVET initiative was created by the Government to strengthen and widen the scope of Tahfiz education to include TVET.

This opens up opportunities for tahfiz students to venture into recognised TVET fields without ignoring their religious education. As a result, Malaysia will see a generation of religious scholars who can even compete in the IR4.0 era.

These models were presented to the Department of Islamic Development Malaysia (Jakim’s) Education and Education Coordination Board last September.

A lack of understanding of the TVET field has been cited as one of the reasons parents and students shy away from this sector. Then there is also a perceived lack of glamour and prestige in having a skills-based career.

To counter this, JKKPTVET has been organising the Explore TVET Expos around the country from September to November, beginning in the northern region to Sabah and then to central region.

A logo and slogan creation competition was also held to positively enhance the perception about Malaysia’s TVET system and at the same time, create a special image of the country’s TVET sector.

There is also the selection of a TVET Influencer who can be a notable figure or celebrity. These role models are key when trying to influence a change of perception among youths towards TVET.

Industries have also gotten involved to ensure that supply meets demand in terms of human capital.

The TVET Valued Industry Partners award refers to the industry partners that have given its commitment, cooperation and support and contribution to the implementation of TVET programmes at the national level.

This award is an initiative by JKKPTVET to recognise and promote industry’s contribution in strengthening the National TVET field.

These efforts in strengthening TVET has yielded success in buy-ins and it is reflected with more than 180 personnel from various stakeholders, which includes relevant ministries, TVET institutions, industry players, NGO, employers association, agencies and many more, to become technical committee members of JKKPTVET.