GEORGE TOWN: Former Penang Gerakan Youth chief Jason Loo is happy that the lawsuit relating to a land sale to a hospital brought by former Penang chief minister Lim Guan Eng against him is now over.

Lim had sued Loo and two others for defamation over newspaper articles on the sale of a piece of land in Peel Avenue to Island Hospital.

“This lawsuit was not a personal battle between me and Lim.

“The sale of the land involved was of public interest.

“It was my duty to ensure the checks and balances were there, ” he said yesterday.

On Friday, High Court judge Justice Rosilah Yop ordered Lim to pay the costs of RM50,000 each to Loo and two other defendants – China Press Bhd and Guang Ming Daily.

The suit was filed by Lim, who is now Finance Minister, against Loo for ill-intent by making a false and defamatory statement, and against the two newspapers for publishing the statement in February last year.

According to Bernama, the articles, after translation, were “Jason Loo: One Man Decides, Pakatan Harapan DAP-led State Government Run by Rule of Man” published by China Press on May 29,2017, while the article on the same date in Guang Ming Daily was “Jason Loo Urges Lim Guan Eng to Explain Why Sell Lebuhraya Peel Land Prior to Gazette”.

The third article was published by Kwong Wah Yit Poh on June 9,2017, after it was translated and titled “One-Man Rule by Chief Minister of Penang”.

In her judgment, Justice Rosilah said the plaintiff had failed to prove that the alleged defamatory remarks made by Loo were published in the two newspapers.

“The three articles were not translated into Malay, so the plaintiff has failed to meet the provisions of Article 152 of the Federal Constitution which clearly states the position of the Malay language as the national language, ” she said on Friday.

The judge said the three news articles were translated by the plaintiff’s second witness (a freelance translator) from Chinese into English, and the translator admitted that his translation was based on the online text and not news published in the newspapers.

“The court found that the plaintiff had failed to meet the claims, causing the case to be faulty and detrimental.

“The court rejected the claims as the plaintiff had failed to prove that the defamatory remarks were made against the plantiff, ” she said.

In a statement on Friday, Lim said he accepted his lawyer’s advice on the outcome of the case which was decided on a technicality and not on the merits of whether the case was defamatory. 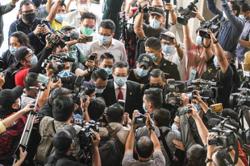 ‘Only assisting in probe’