AS it gets closer to Sept 20, excitement escalates to a fevered pitch for the titular Formula 1 Singapore Airlines Singapore Grand Prix 2019 held at the specially built Marina Bay Street Circuit.

Once again, the world’s finest drivers are set to rev their engines with speeds of up to 325km/h, in the 5.063km racing circuit built around Singapore’s Marina Bay.

Since 2008, ever since it hosted the first event, Singapore Grand Prix stands out as a unique experience for F1 spectators and enthusiasts with the race circuit being held on the streets of Singapore itself.

Another standout fact is that it offers one of the longest pit lanes on the F1 calendar, all 404 metres. Drivers will be doing 61 laps along the total track length of just over 5km with about 23 corners and a racing distance of over 308km.

The Formula 1 race will see 20 drivers from 10 teams go head-to-head. The fact that the circuit runs around the city poses challenges that will undoubtedly test the drivers’ mettle. A combination of factors, from the circuit’s bumpiness and heavy braking zones, to the use of artificial lighting as opposed to daylight and humidity, all combine to push contestants to rely on their experience and skills.

In the past six years, the four drivers who won at the Singapore Grand Prix went on to win the coveted World Championship.

The Marina Bay Street Circuit was designed to follow harbour-side circuits such as the Circuit de Monaco or the Valencia Street Circuit and was designed by American engineering and construction company KBR, Inc – a modification of the initial proposal by German racing driver and circuit designer Hermann Tilke.

When construction starts each season in May, all race-related infrastructure, which include the barriers, fences, cables, track lighting and more, is transported in from a 38,130sq m storage facility in east of Singapore.

As the infrastructure takes shape around the circuit in preceding months, nine grandstands and corporate hospitality facilities to accommodate 86,000 daily spectators take form. A crucial feature of SGP is the lighting around the circuit – for that, SGP turns to the state-of-the-art system of Italian lighting specialists DZ Engineering in order to deliver optimal visibility for night race conditions.

Around 1,600 lighting projectors are carefully positioned around the track to give the world’s best drivers better focus when they course through the tracks, producing minimal glare or reflections from a wet surface or spray from other cars.

In just mere weeks before the opening, other peripheral constructs get added on, from entertainment stages to tents for merchandise and food and beverage outlets.

The Formula 1 Paddock Club, Sky Suites, The Green Room and Twenty3 are all being fitted out ready for the caterers to deliver a five-star experience.

The week before the race, around 700 tonnes of F1 equipment arrives in the pit-lane – comprising air cargo from the teams, including the all-important cars.

Side events full of glamour 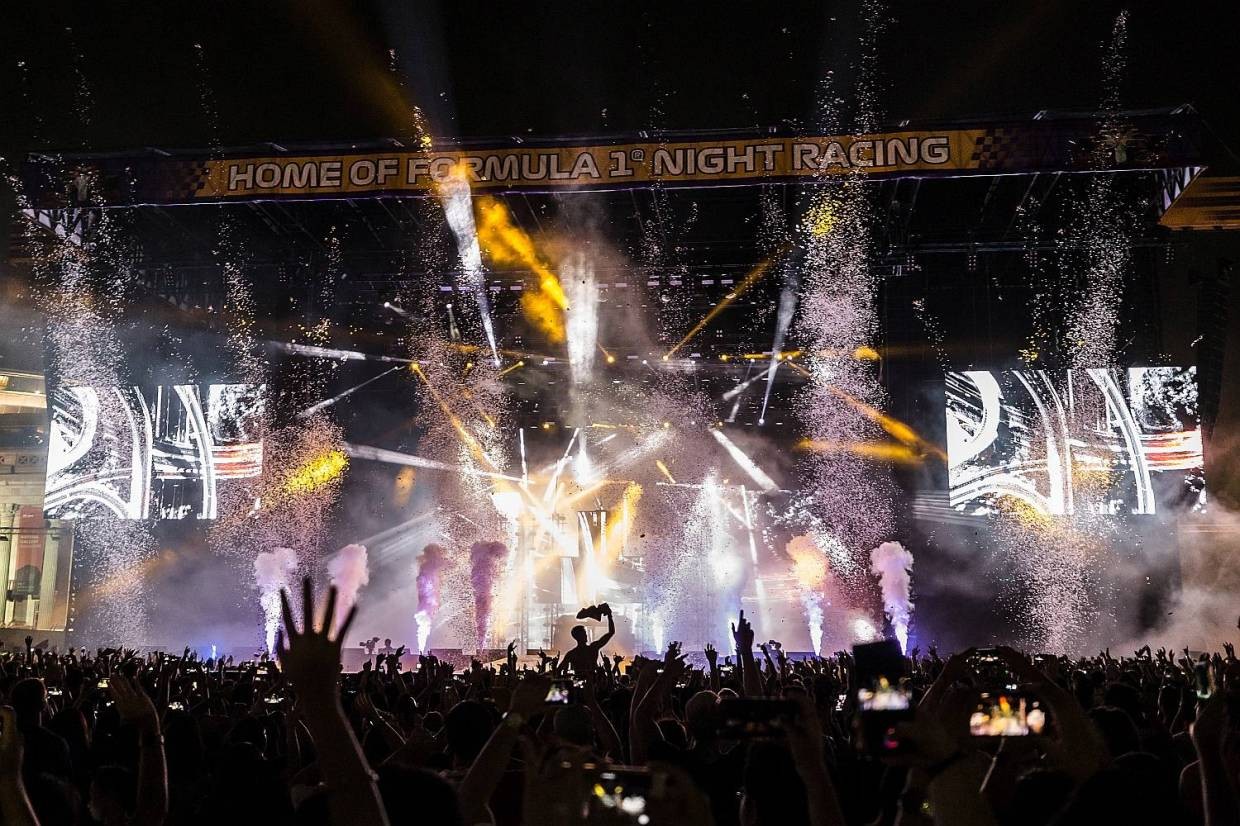 Soak in the energy and power generated from the excitement of the three-day F1 race season.

As with other F1 events, spectators have come to expect the occasion to pump up the volume with electrifying international acts, as the racing circuit reach a gladiatorial pitch.

Powerhouses set to take the stage by storm this year will include the Swedish House Mafia, Muse, Red Hot Chili Peppers, Gwen Stefani, Fatboy Slim, Hans Zimmer, Toots and the Maytals, plus many more.

Among the international acts performing at the F1 event are (from left) DJ and musician Fatboy Slim, film score composer Hans Zimmer, as well as singer and songwriter Gwen Stefani. 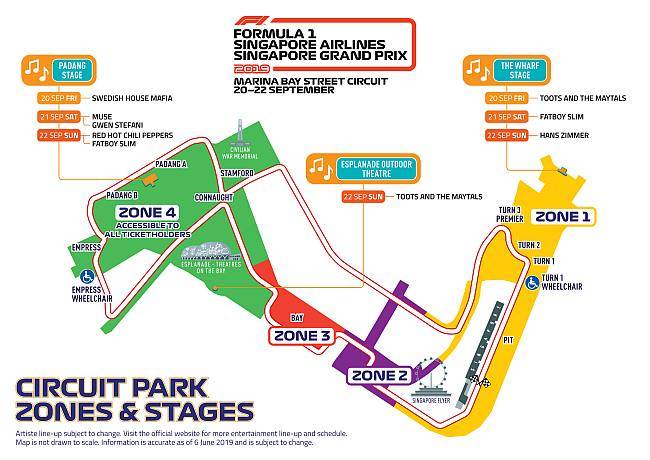 In addition to the star-studded musical performances during the three-day event are a wide range of engaging activities and games such as race simulators, Pit Stop Challenge where fans can change the tyres of a replica Formula 1 car, complimentary Airbrush Tattoo booths and a myriad of roving entertainment and photo opportunities.

Outside of the Circuit Park, the excitement of the Grand Prix Season Singapore (GPSS) return with thrills on the tarmac and a host of exciting off-track events across the city-state.

The fun starts for visitors to Singapore just as they step off the aerobridge into Changi Airport terminals. Expect a range of immersive activities at the terminals; from local retail showcases, to car displays, virtual reality experiences and exclusive promotions.

There will be a busking competition called “Glam Voice”, which is part of a larger Kampong Glam Precinct Party set to rock at eight locations across the district from Sept 14, starting 7 to 10pm.

Those who love shopping, there’s only one place to head to in Singapore - Orchard Road. The famous shopper’s haven will be part of the F1 festivities as it hosts the Orchard Road Precinct Party.

The Formula 1 Singapore Airlines Singapore Grand Prix 2019 is one of the world’s great sporting events. General tickets to the 2019 event starts at S$98 for a single-day and S$498 for all three days.

For details or to purchase tickets, visit www.singaporegp.sg