Her Majesty paid homage to her maternal Chinese grandmother in a post titled “Love sees no colour” which was posted on the Royal Johor Facebook page yesterday.

Raja Zarith Sofiah said when she turned 60 a few days ago, the gifts she received from her eldest son, Tunku Mahkota Johor Tunku Ismail Ibni Sultan Ibrahim, were photographs of his three children, complete with their little palm prints and footprints.

“These were wonderful reminders that I am now a grandmother of three! Alhamdulillah, I am blessed!

“Those photographs are displayed on my shelves together with the many others of my family,” she said.

Raja Zarith Sofiah said among the photographs was one showing Tunku Ismail as a baby, being held in the arms of her maternal grandmother.

Her Majesty said her grandmother was a Peranakan Chinese and her late brother was Tan Sri Chang Min Tat, a Malaysian Federal Court judge.

“Although she hardly visited us in Johor Baru, we would see her at my mother’s house every time we were in Ipoh to celebrate Hari Raya with my Perak family.

“Children are actually, if left to their own pure and innocent thoughts and their own understanding of the world, oblivious about racial differences.

“It is us, as parents, who consciously or unconsciously make them aware about these differences,” she said.

Raja Zarith Sofiah said as a parent, she was determined to let her children know that her grandmother was a Chinese, and to accept it in the same way that they know their own paternal grandmother was an English.

“I hoped they would learn to be proud of the blood that flows through their veins and to understand that it does not make them any less Malay,” she said.

Her Majesty added that growing up, she used to see her grandmother in her embroidered Nyonya kebayas and batik sarongs.

“My grandmother always had a handkerchief tucked into the silver belt that held up her sarong and when she became older and her hands started being unsteady at pinning the brooches onto the kebayas, she stopped wearing them and wore buttoned-up kebaya-like tunics and sarongs instead.

“Sadly, she passed on when my children were still very young. But I would always show them the photographs of her so that they will never ever forget about her,” she said.

“At the age of 60, I realise that there is still so much for me to learn.

“One thing I do know for sure, however, is that my Chinese grandmother was as Malaysian as I am myself.

“I know too that my children, even with their mixed-blood heritage, are also as Malaysian as I am,” she said.

Raja Zarith Sofiah also said that Tunku Ismail was hoping to perform the haj next year and she would ask him to pray for his parents, their family as well as his nenek.
Article type: metered
User Type: anonymous web
User Status:
Campaign ID: 18
Cxense type: free
User access status: 3 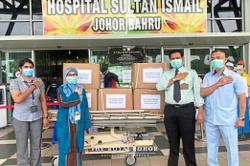 Johor medical frontliners get 1,050 units of PPE from royal foundation