PUTRAJAYA: Anti-graft authorities will schedule talks and dialogues with companies to discuss anti-corruption measures that they should have in place to meet the requirements of a new legal provision to be enforced in June next year.

This would be done to allay fears of private and government-link companies about Section 17A of the Malaysian Anti-Corruption Commission (MACC) Act, said MACC chief commissioner Latheefa Koya.

Section 17A states that a commercial organisation could be prosecuted if a person associated with the organisation offers gratification to enable it to have an advantage in its business dealings. 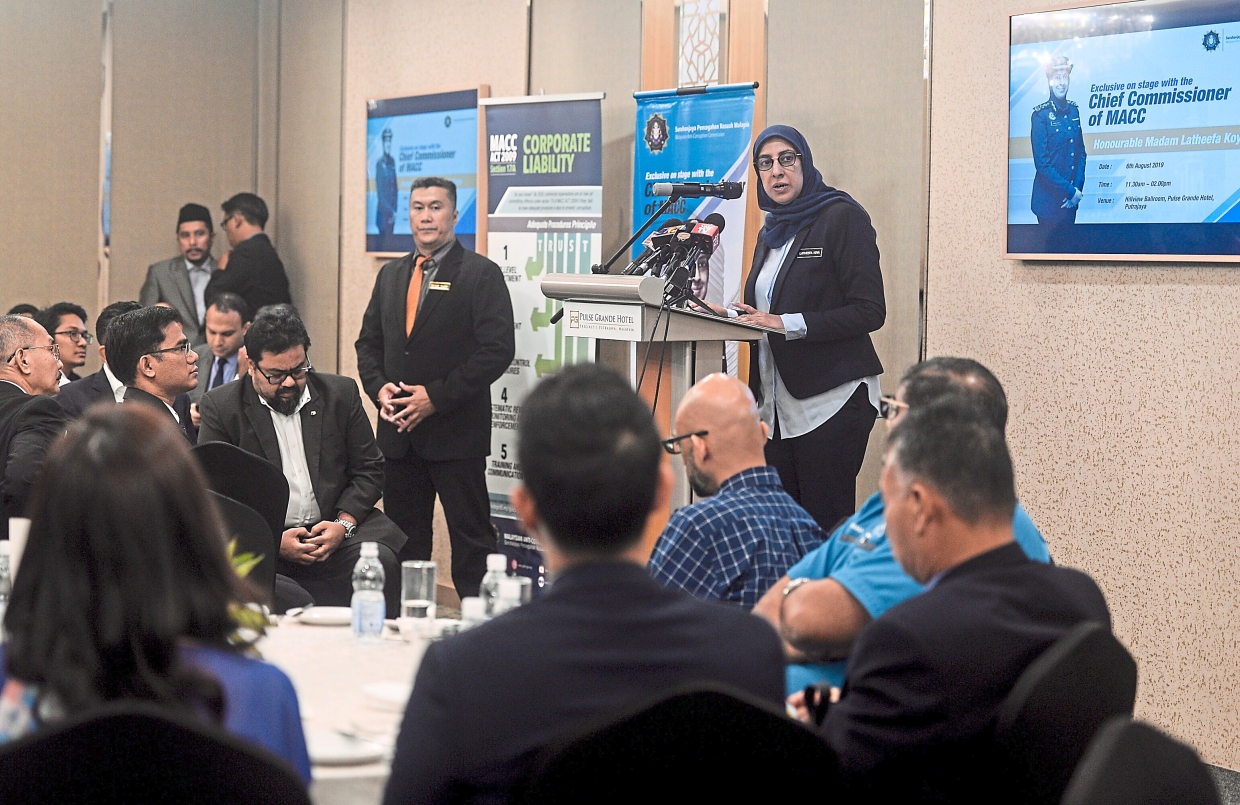 Exclusive talk: Latheefa delivering her speech at the dialogue session in Putrajaya.

“We are getting feedback (from companies) and will present the feedback as well as their concerns to the policy makers, ” she said after an “Exclusive on Stage with Chief Commissioner” dialogue session with representatives from 30 GLCs and the private sector about Section 17A.

Latheefa said the introduction of the new section was to promote good governance as well as to act as a deterrent.

As a signatory to the United Nations Convention Against Corruption, she said Malaysia would have to put in place measures to prevent corruption involving the private sector.

On another matter, Latheefa said MACC officers were reviewing cases that had been closed or marked “no further action” (NFA).

Some of the files could be very old, she said when asked how far back would MACC dig into such cases.

She also declined to comment when asked whether these would include cases from Sarawak.

It was reported in May that the Sarawak governor’s office had stated that the MACC had exonerated Governor Tun Abdul Taib Mahmud from any wrongdoing following claims that he was linked to an allegedly illegal land-clearing operation near Mulu national park.

Latheefa also said the MACC was getting good cooperation from MPs on declaration of assets, adding that aside from giving information on their assets, lawmakers were also required to state their liability.

“It is not just asset declaration per se but also their liabilities, so that it will be fair, ” she said.

The Dewan Rakyat last month approved a special motion for all MPs, senators as well as their immediate family members to declare their assets.

The motion, the Code of Ethics for Administrative Members and MPs, was passed with a voice vote in Dewan Rakyat.

On another issue, Latheefa said that on an average of 100 complaints received by the MACC, only 30% were categorised as corruption.

“The rest could be complaints meant for local councils, sexual harassment, reports about the police, even road problems. We have receive a report because the person was not happy to have lost a court case.

“Managing complaints is our biggest challenge. People think MACC can solve all problems, ” she said, adding that her office would get about 30 to 40 complaints and reports daily.