He said the statement was not made in a personal capacity nor did it have anything to do with his position as state chairman.

"If you look at the statement, it is not my statement.

"It is the statement of the MPN (state leadership council) of Sarawak and signed by 24 division chiefs," he told reporters after the MPN's closed-door meeting with Anwar and other national party leaders here on Sunday (July 28) night.

Baru was refuting an online news report claiming that he had acted out of fear in issuing the statement of support for the party president as well as his deputy.

The report quoted an anonymous state PKR divisional leader who accused Baru of being scared of losing his position in the state leadership council.

"I don't know where they got this idea. It's very clear that the statement has nothing to do with my post," Baru said.

The state PKR's statement on Saturday (July 27) declared support for both Anwar and Azmin and called on them to unite the party, close ranks and focus on winning the Sarawak state election due in mid-2021.

It came in the wake of a public spat between Anwar and Azmin over the sex video scandal implicating the latter.

Meanwhile, Baru said Anwar's message to the state leaders during the meeting was to "move forward and move on" from the incident.

"I took that as a positive response because I have said the same thing that we have to move forward.

"I don't want to dwell on the past and on disputed issues. What is more important – and the state leadership agrees with me – is that the rakyat are very concerned about how we should improve the economy of the country and meet the needs on the ground.

"We are aware of this and we are trying to rise above the internal bickering in the party," he said. 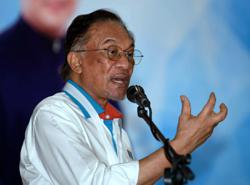