The Education Ministry confirmed his appointment, which is effective from Tuesday (July 30) until July 29, 2022.

Prof Taufiq was chosen for his expertise, knowledge, experience and achievements while holding various administrative posts, both locally or internationally.

The Education Ministry said in a statement on Saturday it hoped Prof Taufiq could continue to contribute to the success of UMS and bring it to greater heights.

Prof Taufiq, 51, who hails from Kota Kinabalu, is a professor at the Science Faculty, Universiti Putra Malaysia (UPM).

He obtained his doctorate degree in Heterogeneous Catalysis from Manchester Institute of Science and Technology University, United Kingdom in 1997.

He had served as UPM's hostel campus head and Catalysis Science and Technology research centre head in the past.

He had been appointed as Fellow of the Royal Society of Chemistry, UK in 2008 and visiting researcher/professor at several renowned universities overseas.

He had received several awards in UPM, and was also the recipient of the national Maulidur Rasul award for his contribution in promoting Islamic harmony as well as his contribution to research and higher education.

"I have not been informed about this. They (Education Ministry) decided on this without informing the top leadership, the UMS chancellor who is the Yang di-Pertua Negeri Tun Juhar Mahiruddin or me as the Sabah Chief Minister," said Mohd Shafee.

He said that he had told Education Minister Dr Maszlee Malik that the Sabah government would submit the names to be considered if a change was needed, but it seems as if the ministry had made its own decision. 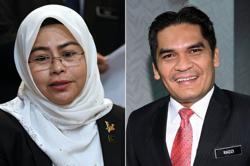