Giving back: Yap Hiew’s family handing over mock cheques to various charitable organisations at the Nirvana Memorial Centre in Sungai Besi. Looking on is Tan (seventh from left) and Thai (in red sash).

KUALA LUMPUR: Four charity organisations received a total of RM125,000 from a family who wish to honour the memory of their matriarch Yap Hiew who died on Monday aged 92.

OrphanCare Foundation trustee Dr Sheik Johari Bux said he was touched when he was approached by the family about the donation.

“In their moment of grief and loss, they found it in their hearts to think of others,” he said when met at Nirvana Memorial Centre yesterday.

Yap’s son Dr Tan described her as someone warm and compassionate.

“Since I was young, she had always been a calm lady.

“I’ve never seen her show anger, nor scold anybody,” he said.

She had touched the lives of the people around her in a unique way, he said.

He added that as such, they wanted to give back to society in a small way by their contributions.

Thai, who was Yap’s son-in-law, said he was grateful the role she had played in nurturing and caring for his family.

“She was instrumental in raising my children, especially as the nature of my work requires me to travel frequently.

“We really appreciate it, and our children said that she had impacted their upbringing when we were busy running our business.

“She had been living with us for the last 28 years, so my children had been brought up by her.

“All the help from extended family members has given us great support to us,” Thai said.

He added that as they had been blessed by her support and care, the family wanted to pay it forward to other needy organisations.

It was a moving scene at the funeral yesterday when family members and friends came to pay their last respects.

Yap’s grandchildren also prepared some of her favourite food in her memory. 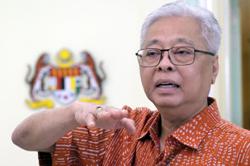 Malaysians in Singapore allowed to return for funerals but only for three hours, says Ismail Sabri