MIRI: More then 50 endangered or exotic animals have been seized from seven pet shops here during raids by the Sarawak Forestry Corporation (SFC).

The raids followed complaints from the local community and expatriates that many pet shops in Miri were selling animals in cruel, cramped conditions.

“Acting on the information, we inspected and raided seven pet shops in Miri from July 15 to 18 and seized the animals,” SFC chief executive officer Zolkipli Mohamad Aton told a press conference yesterday.

It is learnt that among those who frequently buy these animals are foreigners, who smuggle them to a neighbouring country, where they fetch a high price and are considered prized trophies by the rich.

Members of the public who have information about wildlife abuse are urged to call the SFC hotlines immediately. 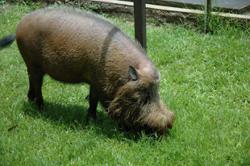