PUTRAJAYA: The Home Ministry had announced another amnesty programme for illegal immigrants in a bid to repatriate undocumented foreigners by the end of the year.

Home Minister Tan Sri Muhyiddin Yassin said the new programme, called “Program Back For Good”, is set to run from Aug 1 to Dec 31.

“We are giving them a chance to come in voluntarily and pay a compound of only RM700.

“They will also need to obtain proper travel documents, like their passports and special travel passes from their embassies, as well as arrange their own transportation back to their home countries within seven days,” he said at a press conference at the Immigration Department headquarters in Putrajaya on Thursday (July 18).

Muhyiddin said the programme would be conducted solely by the Immigration Department, and no middlemen or agents would be involved.

“It is only available in Peninsular Malaysia,” he said.

When asked about why yet another amnesty programme was launched despite warnings of there being no second chances after the last amnesty programme, Muhyiddin said he did think about not doing it.

“I am reluctant to be frank (to hold another amnesty programme). While the previous programmes were effective, the number of illegal immigrants in the country is still large.

“Even I don’t know how many. So we urge them to take this chance to go back to their own countries.

Don’t come back,” he said, adding that those repatriated would be blacklisted.

He also said that there would be no extension to the programme like in the past.

“We mean business. Five months is plenty of time.

"Once the new year begins, we will take action against both the illegal immigrants and their employers to the full extend of the law,” he said.

Muhyiddin said around 200 officers at about 80 counters at Immigration offices in Peninsular Malaysia were ready to help facilitate the process.

He said the government would not entertain issues like undocumented workers not being paid by their employers and not having money to go home.

“They are here illegally. We are not going to help settle their salary disputes,” he said. 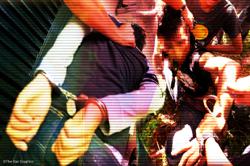