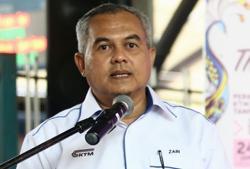 "Eight of the 30 cement wagons were derailed, while the remaining 22 and the locomotive remained on the track.

"We were forced to close three stations, namely Rawang, Kuang and Serendah stations for repair work and for moving the derailed wagons because the track and cable were badly damaged.

"It is expected to take five to six days and we will try to make sure the track is accessible latest by Monday,” he told a press conference here on Thursday (July 18).

"We will also speed up upgrading works of another track on the route under the Klang Valley Double Track Project (KVDT).

Rani Hisham said about 30 intermediate buses and vans have been provided for all passengers involved to continue their journey to Sungai Buloh, Kuang, Rawang and Serendah and vice versa for free.

"ETS passengers who are heading to destinations between both KL Sentral  and Tanjung Malim Stations have also been provided intermediate buses to continue their journey,” he said.

Passengers who wish to cancel their trip, whether using ETS or Komuter tickets can claim full payment at any KTMB station.

Members of the public can get more information at www.ktmb.com.my or KTMB’s official new media channel on Facebook KTM Berhad, Instagram ktmbofficial, Twitter @ktm_berhad or by phone to the KTMB call centre at 03-22661200.

In the 5.38pm incident, a cargo train carrying cement load derailed close to Rawang Station, resulting in a single track between Rawang and Kuang to be completely blocked.

The train travelling from Tasek, Perak to Sungai Buloh in Selangor overturned at KM356.016, but the driver and his assistant were not injured. - Bernama