Time for me to come back and lead Umno, says Zahid

PUTRAJAYA: Datuk Seri Dr Ahmad Zahid Hamidi said his return to helm Umno is not connected to the purported attempts to stop him from retaining the top post in the party.

Rather, he feels that he needed to continue his responsibility tasked on him by Umno members when they elected him a year ago.

“Being away for six months is long enough. It is time for me to come back and lead Umno as its president because that is what I have been entrusted to do.

“Umno’s struggle must go on, and as president, it is my responsibility to lead the party and hold it together to face challenges. This is the time where we move collectively and together,” he told The Star yesterday.

The Umno president announced his return to active duty on Sunday, which coincidentally marked his first year helming the party after winning the post on June 30 last year.

On Dec 18, 2018, he temporarily handed over his duties as president to his deputy Datuk Seri Mohamad Hasan in the interests of the leadership and party.

On the proposal to amend the party constitution so that leaders with court cases like him and former president Datuk Seri Najib Razak do not retain their positions in the party, Ahmad Zahid said he was not worried about it.

“What needs to be done now is to ensure undivided loyalty by Umno members for the party. The party needs their support and loyalty, especially in these trying and challenging times,” he said.

Ahmad Zahid said he would be chairing the Umno supreme council meeting at the end of the month and would be kept busy with invites to launch division meetings.

“I had 10 divisions inviting me before I made the announcement. Now I have 30 others requesting me to open their meetings,” he said.

He believed the court cases that he was facing would not interfere with his duties as Umno president.

“When I left, there were 47 charges against me. Now the number has risen to 87. But I should not abandon my responsibility because of this,” he said. 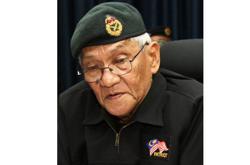