Fire engulfs landscaping at Genting, blaze put out by fire and rescue personnel

A screengrab of one of the videos.

GENTING HIGHLANDS: Videos of a fire at an escalator here have gone viral on social media and WhatsApp.

The seven-second and 13-second videos show the fire engulfing the landscaping that had plastic flowers near the escalators.

"The space near the escalator corridor between the indoor theme park and a hotel here was on fire," he said when contacted.

He added that when they arrived, the fire had engulfed the landscaping there.

"We used a fire hose and seven fire extinguishers to put out the blaze.

"The cause of the fire is being investigated by our forensics unit," he said. 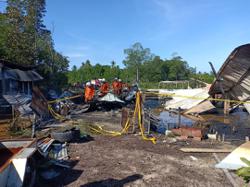 Mother died trying to save her sons in Raya fire tragedy