MELAKA: The once controversial mega project Melaka Gateway has now been accorded “iconic development” status by the Federal Govern­ment.

“A special committee will oversee the project. The federal commitment to the project is solid,” he said after the Parti Pribumi Bersatu Malaysia (Bersatu) Hari Raya open house and the opening of a new Bersatu office in Ayer Keroh here yesterday.

Redzuan said Melaka Gateway, an offshore development of artificial islands in the state, was trying to attract big investments and international hotel brands.

He added that a theme park would also be built.

“These are in addition to an international cruise ferry terminal that is being developed jointly with Royal Caribbean Cruises Ltd of the United States.

“Other details will be announced by the Prime Minister,” he said.

The RM43bil Melaka Gateway project, which will encompass a 552.8ha area, was launched in 2014.

There was uncertainty following the 14th General Election (GE14).

Disputes emerged over the freehold land status given to the deve­loper and environmental impact issues affecting the residents of the historic Portuguese Settlement.

Up till now, it has been a policy of the Melaka government to only grant leasehold titles to developers of commercial and housing schemes in the state.

Last September, the state government announced that 60% of the mega project had been completed before GE14 and gave approval for the project to go on as planned.

Two months ago, KAJ Develop­ment filed for a judicial review at the Kuala Lumpur High Court to challenge Transport Minister An­­tho­ny Loke’s decision to cancel the port operating licence which was granted to the developer by the previous Barisan Nasional government.

KAJ Development named the Melaka Port Authority, Loke and the government as respondents in the application.

The company sought a certiorari order to quash the cancellation of the operating licence.

It also sought general damages to be assessed by the court and special damages of RM139bil. 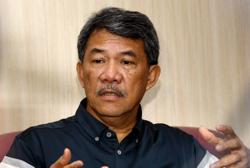