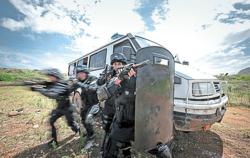 The cases came from different cities and countries, but when Wotherspoon started asking about the mules’ recruiters, many seemed to trace back to the same person – a drug lord named Shanker*.

The way Shanker’s gang operates is simple: the senior members recruit impressionable young men and women to carry innocuous-looking packages across borders – as far as Brazil – and promise a generous fee in return. Of course, the packages are lined with drugs, something many of the mules are not aware of.

Mules who have proven reliable, who have made several trips and seem wise to the true nature of the entire operation, are then trusted to become recruiters themselves – and paid handsomely for each new recruit. It’s multi-level marketing for drugs.

Many syndicates use a similar model. Recruiting dozens of “dispensable” mules to traffic small amounts of drugs is less risky than moving big shipments of several tonnes, where each foiled attempt could cost millions in street value. With mules, the syndicates can also improve their chances of success by setting up one or two mules – usually carrying smaller amounts – to get caught on each trip, distracting authorities enough for the majority to slip through.

“Drug traffickers are happy to give up some mules to keep the authorities happy,” said British lawyer Michael Vidler, who has been practicing in Hong Kong for over 25 years, focusing on human rights. He has worked on drug mule cases as well.

“The syndicates don’t care – it’s part of their business model. Even if, say, one out of eight mules get through, they’re still making money.

“The police are motivated more by high (arrest) numbers than the ‘quality’ of arrests. We have to get the people at the top, not just the drug mules.

“You have kingpins organising millions in drugs who aren’t being nabbed, while drug mules are getting 30 years in prison.”

Getting to the people at the top, however, is a huge challenge.

One of Shanker’s victims, a young man who was too afraid to speak in person, said he was lucky to have discovered the hidden drugs in the parcel of “documents” Shanker had sent him to collect in Sao Paulo.

Horrified, he threw the drugs away at the airport and bought his own return ticket. Had he been caught at the delivery point in Malaysia, he would have faced the death penalty.

Shanker decided to teach him a lesson for dumping the drugs, and sent a gang of thugs to beat him up. If that wasn’t enough to silence him, the continued death threats via text message certainly were.

Now, he feels lucky to be alive, and wants to put the whole episode behind him.

As Wotherspoon continued looking into the syndicate, he found even more shocking stories. Shanker’s recruiters are said to have sent out over 100 mules, and have left many to rot in prisons overseas when they are caught.

According to Wotherspoon, Shanker’s syndicate is working with a Nigerian trafficker in Hong Kong.

“He goes by a few different names, and he is one of the masterminds here in Hong Kong who’s orchestrating the recruitment of drug mules in Malaysia,” he said.

Wotherspoon hopes to use information about Shanker and the Nigerian’s network to help Nades’ case in court (read Chapter Four).

After over two years in prison waiting for his case to be heard, Nades was about to go to trial soon. Time was ticking.

Nades said he passed all the information he had to the Malaysian Consulate in Hong Kong, including the names of his recruiters, hoping for the authorities to take action.

“I have spoken to the consulate so many times about this my mouth has run dry,” he said. “But nothing happened.”

Wotherspoon, however, received a lucky break.

One of Shanker’s recruiters, Arwind, still only 23, wanted to come clean and expose his boss.

Despite being a recruiter, Arwind claimed he didn’t know he was recruiting drug mules.

He had met Shanker at a wedding. Upon hearing that Arwind was jobless at the time, Shanker offered him a job as a courier. He would get paid to travel to South America and Hong Kong – all he had to do was deliver a package along the way.

“Shanker’s way was to tell people they are transporting documents. It’s just documents in the bag, and you transfer it to Hong Kong,” he said.

Do the other mules know they are carrying drugs?

“No. They just know that there are documents in the bag. That’s Shanker’s approach.”

Arwind said he was rejected for the South America trip because there was some unknown issue when they tried to book his flight. He got into an argument with Shanker, who then decided to send Arwind’s sister instead.

From then on, Arwind acted as a recruiter under his sister, who seemed to have gained Shanker’s trust, and would reportedly go on to work directly with the Nigerian in Hong Kong.

Arwind claims he only ever recruited two people, and finally realised the true nature of the business when one of them was arrested in Hong Kong.

He later heard that over 30 of Shanker’s drug mules have been arrested overseas. He also heard that syndicates like to recruit Malaysians because their passports are very “powerful” – they get visa-free entry in many countries.

“The only way to stop this is to catch Shanker,” claimed Arwind.

“But he is a very dangerous person. He can go to any extreme level.

“If he finds out what we are doing, he could do something to my life.”

* All names have been changed to protect the identity of the families involved. Read the final chapter on Sunday, June 30, in The Star and at rage.my/drugtrade.

PREVIEW OF THE FINAL CHAPTER:

The Fight Back (out tomorrow in The Star)

“I am not afraid of them. Why should I be?” said the young lady sitting across the table.

Jennifer is determined to bring to justice the men who recruited her brother, Simon, as a drug mule.

“Every time I visit my brother or receive his letters, I feel so sad. He’s not a bad person, just very naive, and now his future is ruined while these ‘friends’ who recruited him are enjoying life.

“But this isn’t just about my brother. If we don’t do something, these syndicates will continue ruining the lives of so many other families,” she said.

* Read all previous chapters of The Malaysia Drug Trade at rage.my/drugtrade