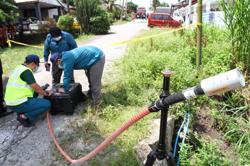 The state PAS' deputy commissioner Dr Mohd Mazri Yahya said it was quite rare for two pollution-related incidents to happen in the same place, albeit from different sources, within a couple of months.

"The Sungai Kim Kim incident, which happened in March, was an incident that should not have happened in the country.

"That was allegedly cause by chemical dumping, resulting in methane gas spreading through the air, forcing 2,775 people to seek treatment at hospitals," he said in a statement here on Tuesday (June 25).

He added that samples taken by the Department of Environment (DoE) from Sungai Kim Kim contained organic solvent such as benzene, toluene, cilena, etil benzina and D-Limonene.

"It is unfortunate that three months later, the country is rocked by a similar incident with Sungai Kim Kim where the symptoms are similar, and now all educational institutions in Pasir Gudang have been ordered to close by the state Education Department.

"When such a disaster happens, it tarnishes the image and invites negative perception towards the role of agencies involved in environmental management in the country," he said.

That the incidents occurred at the same place and in the same state within a short period of time also highlighted flaws in the state's disaster management system, he stated, adding that  were no mere coincidence but a weakness.

He asked how many more such incident might happen again.

It has been reported that the authorities have narrowed down the list of suspected polluters to 30 chemical factories, and the order is out to find the main polluter.

Johor Mentri Besar Datuk Dr Sahruddin Jamal said he had given a directive to the Department of Environment (DoE) and other agencies to find the main culprit.

A total of 475 education institutions in Pasir Gudang including 111 primary and secondary schools, three higher education institutions, 14 private and international schools and 347 private kindergartens registered with the state Education Department were ordered to close for three days following the latest incident.

To date, more than 100 students from more than 30 schools have been affected by the latest incident which happened on Thursday (June 20).

This is the second time in three months that the authorities have ordered all schools in the district to be closed down due to pollution.

In March, all 111 schools were also ordered to close because of th etoxic fumes coming from Sungai Kim Kim. 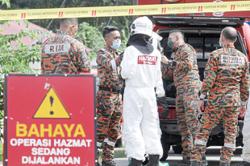