GEORGE TOWN: There is energy stored in food waste and Penang is going to get some of it back instead of sending it the landfill.

A six-month trial will be carried out at a biogas converter in the Batu Maung Solid Waste Transfer Station here to see its viablility.

All the biogas created will be used to fuel a gas-powered generator to create electricity that will be fed into the power grid.

“After successful calibration, the plan is to turn 150 tonnes of food waste a day into electricity.

“Darco Industrial Water Sdn Bhd and Q2 Engineering Sdn Bhd have been chosen to implement the project, which uses an anaerobic digester to churn biogas out of food waste,” he said.

Biogas is mainly methane and can be used for cooking or to power vehicles. However, it tends to contain certain amount of pungent hydrogen sulphide, resulting in an unpleasant odour when biogas is burned as fuel.

“This food waste-to-biogas-energy facility will not be at Batu Maung but at another site. About 40% of the organic and food waste collected will be processed there,” said Jagdeep during the launching of the pilot plant yesterday by Chief Minister Chow Kon Yeow.

Jagdeep said the average waste a day was 671 tonnes and around 250 tonnes were organic and food waste.

“Anaerobic digesters are not new. In Denmark, they can process 2,000 tonnes of waste into biogas.

“This project will bring enormous benefits and make the recycling of other forms of waste more efficient.

“Even the waste from domestic animals will be used to produce bio-gas,” he said, adding that this would help reduce pollution in rivers.

Separately, Chow said Penang has only one landfill, which is in Pulau Burong.

“It has a lifespan of another 27 years if up to 2,000 tonnes of solid waste is buried there every day.

“Work has begun to make recycling various forms of waste even more efficient to increase the landfill’s lifespan to 37 years,” he said.

Chow said the management of solid waste was a burden to the local authorities.

“All these efforts will go a long way to reducing the problem.

“We hope this biogas energy project will be successful and a full scale plant is developed for the benefit of all,” he said, adding that the state would take the lead in solid waste management in the country. 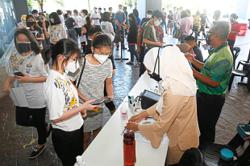