Outbreak is a ‘wake-up’ call

By Jo Timbuong and Joseph Kaos

PUTRAJAYA: The common measles, combined with a fragile im­mune system and severe malnutrition, have been cited in the possible deaths of 15 Orang Asli of Kampung Kuala Koh in Gua Musang, says the Health Ministry.

But health authorities are concerned that only a handful of the Orang Asli have received the Measles-Mumps-Rubella (MMR) vaccination needed that would have strengthened them against the disease.

Describing the deaths as a “wake-up call”, Minister Datuk Seri Dr Dzulkefly Ahmad said only 61.5% of those in Kampung Kuala Koh have received their first dose of MMR (measles, mumps and rubella) vaccine, and only a mere 30% have received booster shots.

“The main factor that has caused the spread of measles among the Orang Asli in Kampung Kuala Koh is the low coverage of MMR immunisation among them.

“This, added with malnutrition, has contributed to the risk of infection and complications.

“This is a real wake-up call. In our mission to provide universal health coverage and not to leave anyone behind, we need to ensure what happened in Kampung Kuala Koh does not recur,” he told a press conference here yesterday.

Dr Dzulkefly said the nomadic lifestyle of the Bateq tribe had made it even more challenging for the ministry’s medical teams to reach out to them and provide the necessary health services.

“During my visits to Orang Asli settlements in Cameron Highlands, we saw how the immunisation level there is at 100%. This needs to be our benchmark.

“The ministry will take this on and work with other agencies, such as the Orang Asli Development De­­part­­ment to prevent a repeat of Kampung Kuala Koh,” he said.

“Lab tests for other diseases, such as tuberculosis, melioidosis, leptospirosis and coronavirus have proven negative,” he said.

There are reportedly 15 deaths due to the outbreak so far, with three classified dead due to pneumonia and multiple organ failure, due to complications from measles.

The most recent death was of toddler Nasri Rosli at the Raja Perempuan Zainab Hospital in Kota Baru on Sunday.

The two-and-a-half-year-old child was suffering from severe malnutrition and weighed 7kg, which was unusually light for children of that age.

“Because of severe malnutrition, the child’s immunity became low, causing him to suffer from measles.

“After being afflicted by measles, the child suffered from pneumonia complications and multi-organ failure,” said Dr Dzulkefly.

He also said that the police and the ministry’s forensic team had exhumed 12 bodies from graves at Kampung Kuala Koh.

A post-mortem will be conducted on the remains at the Hospital Gua Musang to ascertain the causes of death.

Dr Dzulkefly said the ministry would ramp up its immunisation drive to all Orang Asli residing in affected areas and increase the Infection Prevention Control (IPC) at its health facilities.

“Other states have also been asked to raise their measles infection surveillance.

“If there are deaths displaying similar symptoms, the state governments must alert the ministry immediately via the Crisis Pre­pa­red­­ness and Res­ponse Centre,” Dr Dzulkefly added. 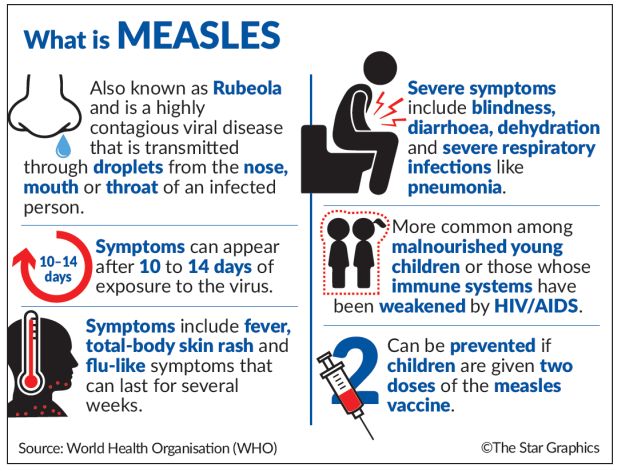 Another Orang Asli man in hospital

Disbelief after measles identified as the cause