E-hailing drivers to hit the brakes

By ALLISON LAI and SARA HENDAWY

PETALING JAYA: At least 50% of e-hailing drivers will “fall out” by the July 12 deadline for them to obtain a Public Service Vehicle (PSV) licence, according to their representative bodies.

Malaysian E-hailing Drivers Association president Daryl Chong said he supported the government’s move to regulate the e-hailing industry, but felt that most part-time drivers would opt not to fork out the extra costs involved.

“There will certainly be a drop in the number of drivers. Although some costs are subsidised, many drivers do not see the long-term gain of adhering to the requirement.

“Also, there are those who are taking it lightly as they are hoping for a U-turn from the authorities,” he said when contacted.

There is said to be about 200,000 e-hailing drivers in the country, with three-quarters of them being part-timers.

Grab Drivers Malaysia Association president Arif Asyraf Ali echoed the view, saying many drivers did not want the hassle of complying with the PSV requirement.

“We expect to see about 50% of the drivers opting out. Since most of them drive on a part-time basis, the procedure to join a e-hailing company directly was much easier,” he said.

E-hailing company Mula said it expected a fallout rate of between 30% and 40%.

Its Kuala Lumpur branch manager Kum­eran Sagathevan said although the PSV course fee was subsidised, the ceiling rate of RM200 was not fixed.

“Demand is already more than supply now, so a shortage of drivers will be inevitable,’’ he said, adding that Mula presently had about 25,000 drivers active in the Klang Valley, Penang and Johor Baru.

Women-only e-hailing company Carriage for Her chief executive officer Nick Smith said the high percentage of part-timers had set the industry back.

“Many part-timers are not driving now. Costs are getting higher and this includes complying with new rules and regulations.

“A driver has to pay and there is no guarantee that they will get many trips. It’s not worth it,” he said, adding that the new requirements made it difficult for the smaller players.

Grab, which is the largest e-hailing company in Malaysia, said it was focused on helping its drivers get through the PSV process.

“We are trying to speed up the process and assist our drivers as much as possible.

“Hopefully, there will be minimal interruption to their daily job of providing transport services to the public,” said a Grab spokesperson.

Last November, the Transport Ministry announced that e-hailing drivers must apply for a PSV licence as is required of taxi drivers.

Drivers have to undergo a six-hour training session at driving centres and pay up to RM200 for the PSV licence.

They must also get initial and annual vehicle checks at Puspakom, pass criminal background and medical checks, contribute to Socso, purchase e-hailing add-on car insurance and equip their cars with safety equipment such as fire extinguishers.

The Road Transport Department will begin a crackdown after the July 12 deadline.

E-hailing driver Dominic Koh, 36, from Seremban, said he had decided to stop as it was not financially viable to continue.

“I have just found a nine-to-five job. I think more e-hailing drivers will do the same,” he said, adding that the outlook of the e-hailing industry was bleak for drivers despite the strong demand from passengers.

Another part-time driver, who wanted to be known only as Raymond, said the PSV licence was only beneficial for full-timers.

“Under the new rules, drivers are also required to wear a white shirt and dark slacks while driving. All these are extra costs to us,” he said.

Full-time Grab driver Chu Zheng Ning, 24, said he had no choice but to comply with the PSV requirement because he wanted to continue driving.

“The concern is the amount of time and money a person needs to become a e-hailing driver, with insurance and safety equipment also costing a lot,” he said.

Chu added that he was thankful that Grab subsidised its drivers to be PSV ready. 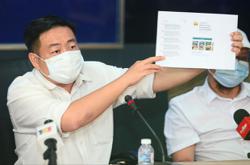